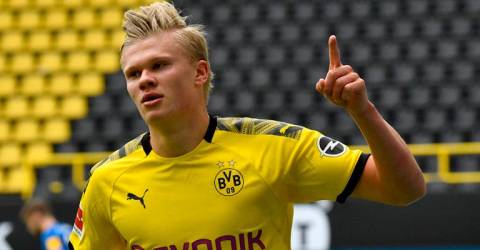 BERLIN: Erling Braut Haaland (pix) has been urged by Borussia Dortmund’s boss to copy the example of Robert Lewandowski, who developed into a world-class striker during his four years at the Bundesliga club.

“Erling, and also his agent Mino Raiola, know what they have in us. I can only advise him to do as Robert Lewandowski did,” Dortmund’s CEO Hans-Joachim Watzke told Monday’s edition of Kicker magazine.

Dortmund plucked Lewandowski from the Polish league as a raw talent in 2010 and, as Watzke said, gave “himself the time to mature into a world-class striker at Dortmund” before joining Bayern Munich in 2014.

He has already netted 22 goals this season, including two in the 5-2 thrashing of Mainz on Saturday, making him the Bundesliga’s top-scorer so far in 2020/21 with 19 goals.

He has attracted the attention of Europe’s top clubs by scoring 33 goals in as many games for Dortmund since his €20 million transfer a year ago from Red Bull Salzburg.

Haaland, now recovered from a hip injury that sidelined him for seven games, was booked for reacting in frustration after wasting several clear chances in Sunday’s 2-0 win at home to Wolfsburg.

The tall Norwegian looked short of match fitness before Jadon Sancho ended his goal drought in the league this season after Manuel Akanji’s opening header.

Haaland reportedly has a €75m release clause in his Dortmund contract, which expires in 2024, but Watzke says he “doesn’t believe” the striker will leave at the end of the season.

Watzke said he has urged Haaland to develop his game to earn the consistency expected of a world-class player like Lewandowski.

“You don’t manage that in one year. Because it’s clear that if Erling were to leave us at some point, he would only go to an even bigger club,” said Watzke. “And there aren’t that many who fit the bill.

“If you go to a club like, just to give an example, Real Madrid, you have to be world class.” – AFP