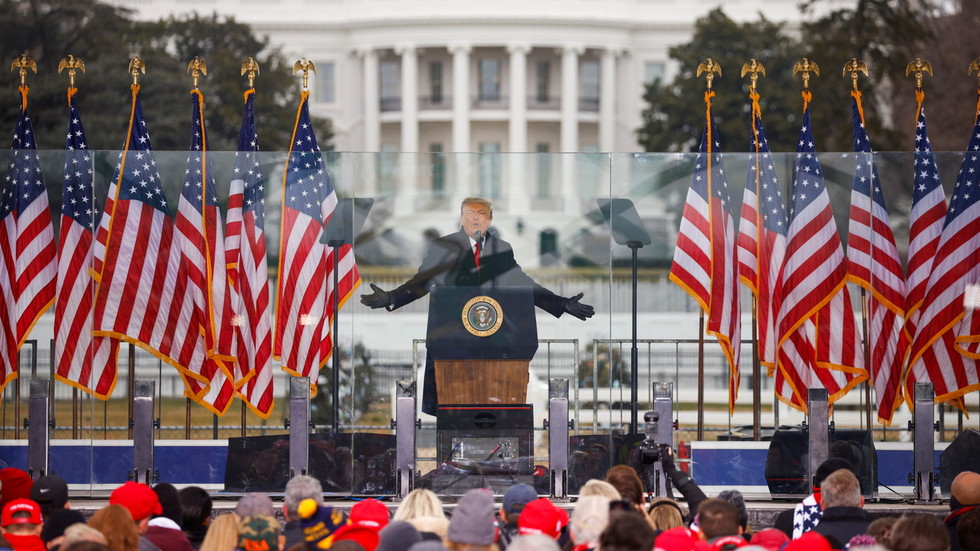 US President Donald Trump has doubled down on his conviction that his political nemeses stole his rightful victory in November. In a rally outside the White House, the president declared he will “never concede.”

Trump delivered his remarks in front of a large crowd of supporters, many of whom were in Washington for the ‘Save America’ rally to protest the allegedly stolen election.

“We will never give up, we will never concede,” the president said. “You don’t concede when there’s theft.”

We will not take it anymore.

Trump focused on the voting statistics, which saw the president receiving more votes than any previous incumbent but still being bested by Democratic rival Joe Biden. Trump repeatedly expressed his desire to “go back eight weeks” and fix the alleged fraud before it tainted the vote.

Also on rt.com
Ted Cruz and other White House wannabes don’t want to save Trump; they just want to cash in on MAGA to help their 2024 ambitions


The president went on to denounce the “weak Republicans” who refused to back his election-fraud crusade even after he helped some of them get elected.

However, he had harsher words for the Democrats, noting that if it was Biden who’d been “cheated” by a Republican candidate, mobs would be destroying small businesses, as happened during summer Black Lives Matter protests.

“If [Republican congressmen] don’t fight, we have to primary the hell out of the ones that don’t fight,” Trump warned.

Trump continued to go after the vote-counting, declaring it “so corrupt that in the history of this country we’ve never seen anything like it.” He likened the sudden spike in Biden votes on Election Day night to “explosions of bulls**t,” then mocked failed candidates including Mitt Romney (R-UT) and former Secretary of State Hillary Clinton.

At one point Trump seemed to be talking directly to Vice President Mike Pence, all but obligating him to challenge the Electoral College results.

Also on rt.com
‘This is a time for extreme courage,’ Trump tells Mike Pence in plea to ‘veto’ Congress’ Electoral College certification


While crowds of Trump supporters thronged the area to do their part to ‘Stop the Steal,’ states already certified their votes last month. Wednesday’s vote is more of a formality- though that hasn’t stopped the president from putting pressure on his VP in the hope of snatching victory from the jaws of defeat.