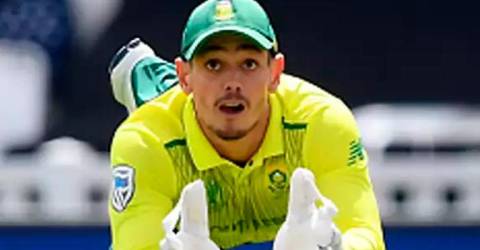 JOHANNESBURG: South African captain Quinton de Kock (pix) has questioned the sustainability of ‘bubble’ life in the age of Covid-19 as he contemplated an upcoming tour of Pakistan – another series in which players are likely to be confined to cricket grounds and their hotel rooms.

Speaking in a virtual press conference to review South Africa’s Test series win against Sri Lanka, De Kock elaborated on comments he made during the post-match presentation after the second Test on Tuesday when he said he had mixed feelings about the tour of Pakistan because of the frustrations of being in a bio-secure environment.

“There are a lot of nerves when it comes to the bubble, lots of small things get into your mind, things that you’re not used to,” he told journalists later.

“Bubbles just make tours longer because of the quarantine period. You stay in your room for a certain amount of time. You get out when we are declared safe. It’s very unsettling. I don’t know how long it can last.”

De Kock’s concerns echoed those of Sri Lankan captain Dimuth Karunaratne, who said his players would face a test of mental strength as they went from one ‘bubble’ to another, flying home from South Africa but going into quarantine immediately ahead of a series against England which starts on January 14.

“It’s really hard to stay in a bubble for a long time,” he said.

The South African players will have a week at home before leaving for Pakistan on Jan 15. The first of two Tests starts in Karachi on Jan 26.

De Kock said he expected there would only be a short break between the Pakistan tour and a home series scheduled against Australia in February and March.

“We’ll probably only be home for about two weeks in the next three months, which is quite a challenge,” he said.

The series against Sri Lanka was De Kock’s second experience of life in isolation in a home series following England’s aborted white-ball tour in November and December. Before that he had played in the Indian Premier League in the United Arab Emirates, where players were also confined to hotels and cricket grounds.

South Africa have not toured Pakistan since the 2007/08 season, with tours to the country halted after a 2009 attack on the Sri Lankan team in Lahore.

But head coach Mark Boucher said Covid precautions and an expected high level of security would not make the tour greatly different from other tours of Asian countries.

“We go to the sub-continent quite a bit and you don’t leave your hotel a lot. We’re used to it,” said Boucher, who went on three tours of Pakistan as a player.

But Boucher said he had sympathy for players in the current unnatural conditions in which modern international cricket is played.

“We’ll keep learning from bubble life and what we have to do to try and make life easier for the players,” he said.

“The longer it gets in these bubbles, the more mental strength the players have to have.”

De Kock said: “I’m excited to get there and play cricket. It’s a new challenge. But the rest of it, the off-the-field stuff, is another sort of challenge. The lockdown is going to be the hardest challenge that we’re going to have.”

The Sri Lanka series was De Kock’s first as a Test captain. “We won the series and we won it quite convincingly but I don’t think we played our best cricket,” he said.

“We put ourselves under unnecessary pressure a lot of times.” – AFP