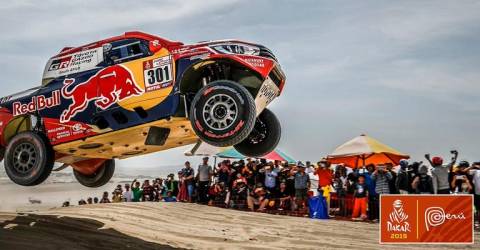 De Villiers completed the 456km special in his Toyota in 5hr 09min 25sec, finishing 0.58sec ahead of compatriot Brian Baragwanath, who has picked up another podium finish this year following second place on the prologue.

‘Mr Dakar’, aka 13-time winner Stephane Peterhansel rounded out the podium, stretching his lead in the overall standings over Nasser al-Attiyah to 6:11 after the Qatari finished fourth, 2:13 behind the Frenchman.

In the motorbike category Benavides overcame a dramatic crash in the dunes that smashed his helmet and left him with a broken nose to win the stage, covering the 456km special in 5hr 09min 50sec.

A stage winner in the four previous Dakars, the Argentinian also leapfrogged Xavier De Soultrait by 2:31 to go top of the overall standings, having finished 7:55 ahead of the Frenchman in the stage.

“It was a really hard day for me,” said Benavides, whose bloodied nose was bandaged post-race.

“At the beginning I got lost like all the riders, but after that I started to push a lot.

“On one dune I jumped, a big jump, and I crashed because I hit another big one with the front wheel. I banged my head … and broke the GPS and everything. I cut myself too and started to lose a lot of blood. There was also some pain around my ankle.”

Benavides pushed on, however, adding he was confident he could continue despite being in pain.

“I think I’ll be okay for tomorrow,” the Argentine said. “It was hard and there was a lot of pain today. But it’s like that, this is the Dakar.” – AFP