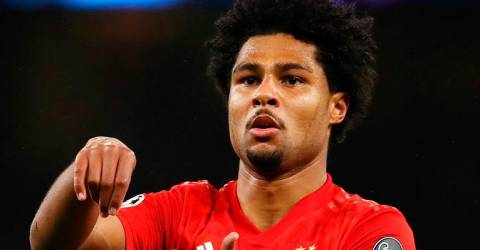 Gnabry took a painful blow to the shin in last Sunday’s 5-2 win at home to Mainz when lethargic defending left Bayern two-goals down before roaring back for a win which kept them two points clear.

Should Gnabry miss out, his place on the wing will go to Kingsley Coman, who is back after a thigh strain.

Victory at Borussia Park would leave Flick on 100 points from 39 league matches, equalling Guardiola who became the first Bundesliga coach to reach the milestone with 101 points from his first 39 games in charge of Bayern.

Of a bigger concern to Flick is Bayern’s habit of conceding the opening goal in their last eight league games, fighting back each time for five wins and three draws.

“I don’t like falling behind – we need a different attitude from the start,” Flick admitted in Thursday’s press conference.

He wants to see “a different dynamic, more intensity, more conviction” because Bayern “can’t just let the opponent run and then hope” goalkeeper Manuel Neuer will make a save.

The Bundesliga leaders have conceded 21 goals in 14 league games this season – more than any other top six club.

The tally is not to Flick’s liking, but Moenchengladbach coach Marco Rose sees chances for his side, who have won two of the last four meetings with Bayern.

“Bayern like to defend very high because it helps them up front,” said Rose.

“That creates chances in other spaces to hit the opponent (on the break). It’s an open secret.”

Flick pulled Joshua Kimmich out of midfield at halftime against Mainz to shore up the defence, which turned the game for Bayern.

Kimmich is set to face Gladbach back in the defensive midfield with Niklas Suele expected to take his place at rightback. – AFP