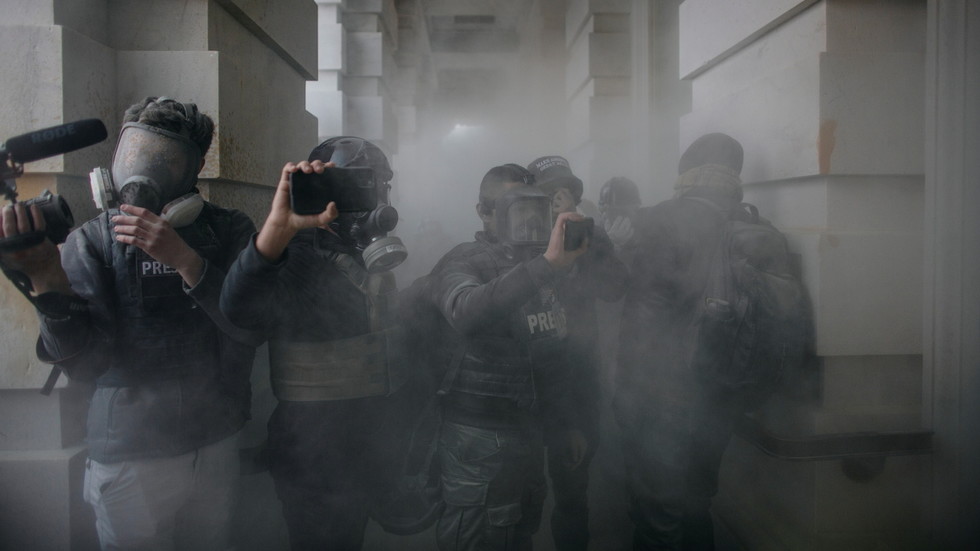 A dramatic video filmed during a violent pro-Trump protest outside the Capitol building shows an AP correspondent being harrassed by suspicious demonstrators, who apparently mistook him for an Antifa infiltrator.

The video, which adds an additional perspective to the picture of how the invasion of the US federal legislature unfolded, was published on Thursday by Associated Press photographer Julio Cortez.

It shows the moment his colleague, John Minchillo, was accosted by some Trump supporters during a tense rally close to the steps leading to the Capitol building.

In the video, Minchillo is shown wearing black clothes, a gas mask and a helmet, when some MAGA activists physically confront him, grabbing him by the straps of his press badge. They shove the journalist around for some time before pushing him right into a person standing on a sidewall. Both then fall down to the grass below the wall.

At this point, another organizer intervenes, identifying Minchillo as a member of the press and not of Antifa, the radical left movement that right-wing supporters of Donald Trump consider their sworn enemies. The organizer tells other protesters to hand over Minchillo’s camera and asks somebody to escort him away.

The protest eventually escalated, with activists breaking into the Capitol building and clashing with the Capitol police. Five people lost their lives during the events on Wednesday, including a female pro-Trump protester who was shot by police inside the seat of the US legislature, and a police officer, who on Thursday succumbed to injuries he received while responding to the rioting.