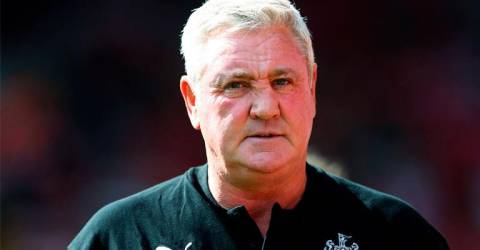 LONDON: Newcastle United manager Steve Bruce (pix) believes it is “morally wrong” for English football to continue as COVID-19 cases continue to surge in the country and disrupt the fixtures list.

Shrewsbury’s third-round FA Cup tie with Southampton was postponed after a significant number of cases reported within their club, while several other fixtures are in jeopardy.

Newcastle were the first Premier League side to be hit by a coronavirus outbreak earlier this season, leading to their training ground being shut down for 10 days.

“Certainly at our club, when you are getting more and more cases every few hours, it is scary… how it ripped through lots and lots of people,” Bruce told a news conference.

“That is something a lot of football clubs are looking at now. Financially it’s right to play on, but for me – morally it’s wrong. I understand people want to play a game of football but we are just as vulnerable as everyone else.”

COVID-19 outbreaks have led to four Premier League matches being postponed and more than 50 games in the lower divisions of the Football League being called off this season.

The Professional Footballers’ Association has urged players to be sensible when celebrating goals to avoid spreading the virus.

But Bruce, whose team face Arsenal in the FA Cup on Saturday, said it was easier said than done and will not condemn any player for enjoying the game.

“Even though we are doing everything possible to stick to the protocols, how do you stop Manchester City celebrating together because they have reached another (League) Cup final like they did the other night?” he said.

“We want to see that. If you stop that, you are stopping the whole enjoyment of sport.” – Reuters