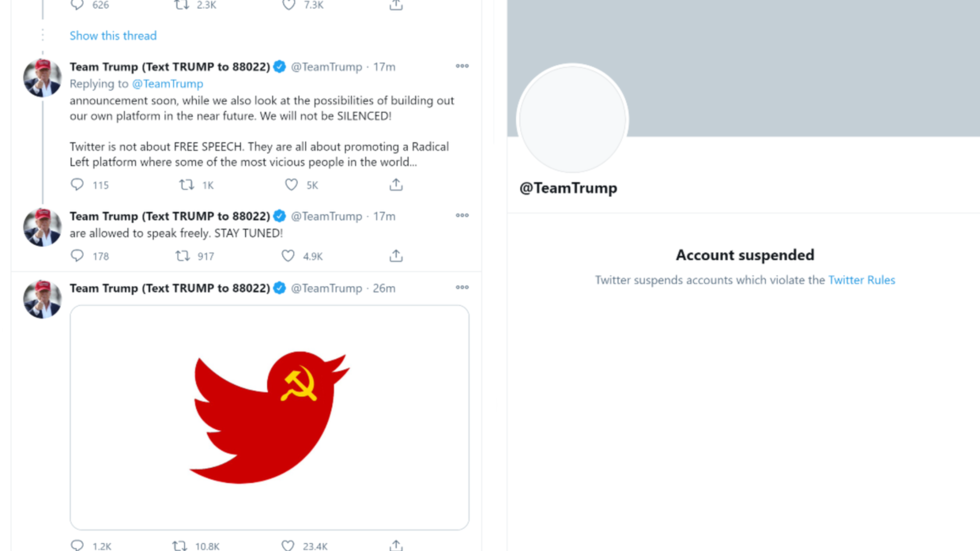 The Trump campaign’s Twitter account was suspended moments after relaying a statement from the president, as Big Tech firms close ranks to ban, silence and disengage him from millions of his supporters across multiple platforms.

The @TeamTrump account was slapped with a ban on Friday night after sharing the words of the president. The same statement was previously scrubbed from the official @POTUS handle following a permanent suspension for Trump’s personal page earlier in the day, with Twitter arguing his posts risked inciting “violence.”

Shortly before the ban, Reuters reports, the campaign handle directed its 2.3 million followers to its account on Parler, a conservative-friendly platform that Trump himself is rumored to be joining, according to Fox’s Sean Hannity.

Also on rt.com
‘We will not be SILENCED!’ Trump tweets from official @POTUS account after ban, posts scrubbed within minutes


In his short-lived statement, which was also published by the White House press pool in addition to the @TeamTrump page, the president lashed out at Twitter for suppressing free speech and promoting the “Radical Left,” suggesting he would soon migrate to another platform while telling supporters to “stay tuned.” His ban came after a raucous demonstration in Washington, DC this week saw thousands of his backers storm the US Capitol building, where five people were killed in the chaos, prompting a litany of web platforms to expel both the president and his fans from their sites.

Joining that drive on Friday night were Discord and Reddit, which handed bans to Trump-supporting groups ‘The Donald’ and r/DonaldTrump, respectively, both citing repeated policy violations of rules around encouraging “violence” and “hate.”

Facebook, Instagram and Snapchat have taken similar steps against Trump’s personal accounts in the wake of Wednesday’s unrest.

Parler, meanwhile, was kicked off of Google’s Play Store earlier on Friday, with the Alphabet-owned company citing the site’s lax content-policing, which it said allowed incitement to violence to proliferate.  Apple’s App Store, too, is reportedly considering following suit.