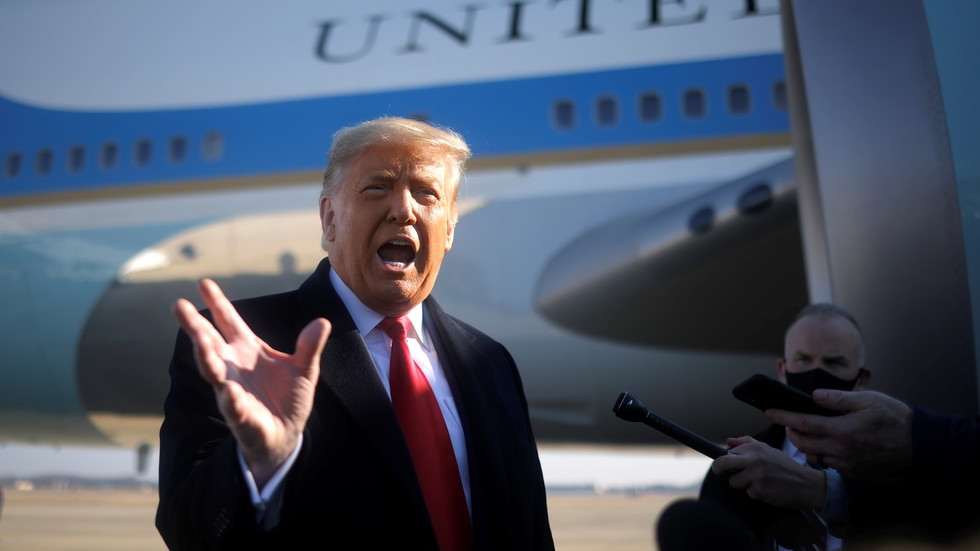 US President Donald Trump has excoriated Big Tech for fanning the flames of division nationwide, accusing the megacorporations which have deplatformed him of doing a “horrible thing to the United States.”

The president skewered the tech giants in an address to reporters on Tuesday as he prepared to board a flight to Alamo, Texas, where he was scheduled to showcase his border wall later in the day. “I think that Big Tech is doing horrible things for our country and to our country, and I believe it’s going to be a catastrophic mistake for them,” Trump said.

Accusing the companies that booted him from their platforms in the aftermath of last week’s riot at the Capitol in Washington, DC of “dividing and being divisive,” Trump suggested the tech firms were “showing something that I’ve been predicting for a long time if people didn’t act on it.” He didn’t explain exactly what that something was, however.

Also on rt.com
CNN says it will NOT carry Trump’s speech live from Texas, calls on ‘responsible networks’ to censor the president


“I think Big Tech has made a terrible mistake [that is] very, very bad for our country and that’s leading others to do the same thing,” Trump continued, hinting at a “countermove” to the many “problems” and “danger” caused by the powerful corporations.

“I’ve never seen such anger as I see right now, and that’s a terrible thing,” the president stated, adding that his administration has “tremendous support, probably like no one has ever seen before” but that it was imperative to “avoid violence.”

Trump declined to take responsibility for the riot at the Capitol, arguing that his political nemeses had made much more inflammatory statements during the summer’s Black Lives Matter riots and demonstrations across the country.

His speech before an assembled crowd of Capitol protesters – who at that point were still peaceful – and later posts on social media were held up by Twitter, Facebook, YouTube, and other tech platforms as justification for deplatforming a sitting president, tagged as “incitement to violence” even though they included no explicit call to attack lawmakers or federal property.

Trump was far from the only conservative social media user to find themselves deplatformed in the last week, however. Hundreds of thousands of Trump supporters, fans of the QAnon conspiracy theory, and other non-mainstream accounts were suspended over the weekend from Facebook and Twitter alike. Amazon on Monday wiped out the domain of Parler, a Twitter-like social media network that has become a refuge for deplatformed Trump fans.

Also on rt.com
The silencing of President Trump by Big Tech is moral cowardice, and all about the opportunistic pursuit of power and profit


The platforms justified their mass removals and account suspensions by attempting to link all deleted users to QAnon and citing the violence of the previous week as proof of an alleged “increased risk of harm.”

While Trump has just over a week left in his term, House Democrats are determined to impeach him again over the riot. They filed an article of impeachment on Monday accusing him of “incitement of insurrection” and plan to ask Vice President Mike Pence to invoke the 25th Amendment to remove the president.