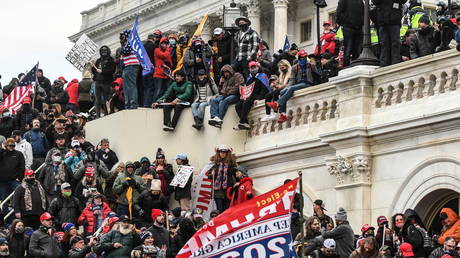 Staff for Rep. Ayanna Pressley (D-Massachusetts) is claiming there is an investigation into office “panic buttons” being removed before the US Capitol riot while other Democrats are demanding a probe into “suspicious activity.”

Democrats are leading the charge into conspiracy theories surrounding the siege of the US Capitol by supporters of President Donald Trump last week, with multiple claims that more could have been involved in the riot.

Pressley’s chief of staff, Sarah Groh, has gained the attention of many social media users thanks to a Boston Globe interview this week where she alleged that panic buttons from the congresswoman’s office had been removed without explanation or warning from her office, something she and Pressley discovered on the day of the riot.

“Every panic button in my office had been torn out — the whole unit,” Groh said, adding that she and other staff had previously used the duress buttons and they had been regularly tested.

A spokesperson for Pressley said in a Wednesday statement that the issue is currently being investigated and new panic buttons were installed in the office the day after the protest.

Even if one assumes this as some totally innocent oversight, how does the department responsible remove ALL the panic buttons from a highly visible member’s office and NOT inform that member or their staff? https://t.co/yH0uBKJv5P

The House sergeant-at-arms and Capitol Police have not publicly addressed the matter, but it is just one of multiple details Democrats are saying needs to be looked into.

Rep. Mikie Sherrill (D-New Jersey) led over 30 members of Congress in signing a letter demanding an investigation from the Acting House Sergeant at Arms, Acting Senate Sergeant at Arms, and United States Capitol Police into “suspicious activity” the day prior to events at the Capitol.

Sherrill claims that lawmakers helped run “reconnaissance” of the Capitol the day before the protest through public tours. She did not specifically name the lawmakers she was accusing.

Also on rt.com
House votes to impeach Trump for ‘insurrection,’ unclear when the case will go to Senate


“Many of the Members who signed this letter, including those of us who have served in the military and are trained to recognize suspicious activity, as well as various members of our staff, witnessed an extremely high number of outside groups in the complex on Tuesday, January 5,” she and others wrote in their letter demanding an investigation.

They claim such access to the Capitol was “unusual” since the area has been restricted and public tours were canceled in March due to the Covid-19 pandemic.

“The tours being conducted on Tuesday, January 5, were a noticeable and concerning departure from the procedures in place as of March 2020 that limited the number of visitors to the Capitol. These tours were so concerning that they were reported to the Sergeant at Arms on January 5,” they said.

They claim those who stormed the Capitol had “unusually detailed knowledge of the layout” of the complex.

Sherill promised in a Facebook Live video that she will hold lawmakers who allegedly gave access to the Capitol to protesters “accountable.”

Sherill’s accusations follow Rep. Alexandria Ocasio-Cortez (D-New York) claiming she did not feel safe around other members of Congress during the riot.

“There were QAnon and white-supremacist sympathizers and, frankly, white-supremacist members of Congress in that extraction point who I know and who I have felt would disclose my location and would create opportunities to allow me to be hurt, kidnapped, et cetera,” she said, not identifying exactly whom she was referring to.