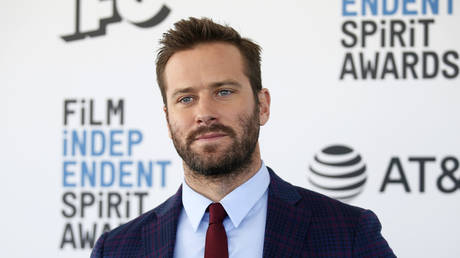 Armie Hammer, who has called Trump a “racist” and bizarrely once referred to his rear end as cake, continues to face fallout from allegations of cannibal fantasies as an ex-girlfriend has come forward with a firsthand account.

Following Hammer dismissing troubling online messages attributed to him fantasizing about cannibalism with partners “bulls**t claims,” ex-girlfriend Courtney Vucekovich has spoken up to say the messages are not at all surprising.

“He said to me he wants to break my rib and barbecue and eat it,” Vucekovich, who dated Hammer over the summer, told Page Six on Thursday.

Recent messages posted by the account House of Effie allegedly belonging to Hammer included one where he described himself as a “cannibal” and another in which he asked someone if he could “cut off one of your toes and keep it with me in my pocket so I always had a piece of you in my possession.”


It’s unclear if the messages actually came from Hammer, but fallout from controversy forced him to step away from an upcoming role in the Jennifer Lopez-starring film ‘Shotgun Wedding.’

“In light of the vicious and spurious online attacks against me, I cannot in good conscience now leave my children for four months to shoot a film in the Dominican Republic,” Hammer said in a public statement about his departure.

Vucekovich said the messages are not a shock as he could often describe “weird” things to her.

“He says, I want to take a bite out of you. If I had a little cut on my hand he’d like suck it or lick it. That’s about as weird as we got,” she said.

Vucokovich, who co-founded the fashion app Flashd, added that the actor “likes the idea of skin in his teeth.”

Known for roles in films like ‘Call Me By Your Name’ and ‘The Lone Ranger,’ Hammer often uses his social media to attack President Trump and his supporters, as well as to promote liberal causes.

Dear people who think Trump not paying taxes for 10 years is ok, if every American ripped off the system that hard by not paying taxes the entire country would literally crumble. Not paying taxes is not a good thing. It’s selfish, unpatriotic, and evidence of a broken system.

It’s a good thing this wasn’t a BLM rally or else these assholes would have actual riot police to deal with.

In one 2017 post, he called out the president over a report that he left a vehicle without waiting for his wife on inauguration day, hashtagging the message with “#lockerroommanners.”

“Anyone who still listens to trump and takes his ‘medical advice’ should, in fact, inject bleach to fight the coronavirus (sic),” he wrote in another post earlier this year.

Hammer previously made headlines for his political views when he called out Marvel Entertainment Chairman Isaac Perlmutter for being a Trump contributor last year.

Hey, while everyone seems to be on this Equinox thing, it might be a good time to mention that one of Trump’s largest financial contributors is the chairman of Marvel Entertainment (Isaac Perlmutter)….. jussayin.

He also made waves in October for an Instagram post saying Trump “might be a racist and a rapist, but god damn he’s got that [cake emojis].” Cake emojis are often used to refer to a full-figured rear end.

To top off the bizarre cannibalism fantasies being alleged, Vucokovich also described her relationship with Hammer as mentally abusive and said she entered therapy following their breakup.

She described the Golden Globe-nominated actor as a “chameleon” who would text her 100 times per day when they weren’t together.