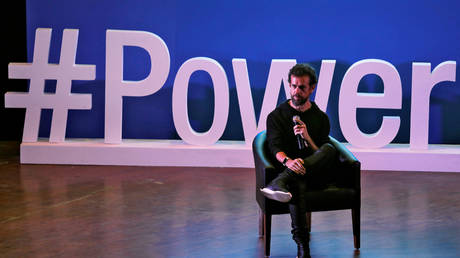 Twitter CEO Jack Dorsey has stood by his platform’s move to block President Donald Trump’s account, while acknowledging that the arbitrary removal of content by Big Tech could spell the demise of online debate.

“I do not celebrate or feel pride in our having to ban @realDonaldTrump from Twitter,” Dorsey tweeted on Wednesday, adding that the decision to boot the president off the platform was still “the right” one.

I believe this was the right decision for Twitter. We faced an extraordinary and untenable circumstance, forcing us to focus all of our actions on public safety. Offline harm as a result of online speech is demonstrably real, and what drives our policy and enforcement above all.

He cited the “extraordinary and untenable circumstances” the social media giant had to consider when it moved to erase Trump’s presence from the platform, saying that the decision was made to protect “public safety.”

“Offline harm as a result of online speech is demonstrably real, and what drives our policy and enforcement above all,” he said.

Dorsey admitted, however, that this shows that the tech giants can mute voices at will if they deem them too dangerous. “Having to take these actions fragment the public conversation. They divide us. They limit the potential for clarification, redemption, and learning.”

[It] sets a precedent I feel is dangerous: the power an individual or corporation has over a part of the global public conversation

Dorsey predicted that deplatforming users over their perceived threat to the public good may be another nail in the coffin of the increasingly obsolete concept of the free internet.

“This moment in time might call for this dynamic, but over the long term it will be destructive to the noble purpose and ideals of the open internet,” he said.

This moment in time might call for this dynamic, but over the long term it will be destructive to the noble purpose and ideals of the open internet. A company making a business decision to moderate itself is different from a government removing access, yet can feel much the same.

Twitter, Facebook, YouTube and Snapchat are among major social media platforms that have either taken down Trump’s account for good (Twitter and Snapchat), or suspended him for “inciting violence” in the run-up to the storming of the US Capitol on January 6 by a crowd of supporters.

Also on rt.com
Trump accuses Big Tech of ‘dividing and being divisive’ after coordinated deplatforming efforts against him


Although he is the most high-profile victim of the crackdown, Trump is not the only conservative social media user to have been silenced in the last week. Hundreds of thousands of his supporters, including believers in the QAnon conspiracy theory, and other non-mainstream media accounts were booted from Facebook and Twitter. Once a conservative social media safe haven, Parler is also on the verge of extinction, with CEO John Matze saying on Wednesday that the company might never be back online after Amazon dropped it from its servers over a failure to swiftly remove “violent” content amid an influx of users.

Also on rt.com
‘It could be never’: Parler CEO says site may not recover after ‘catastrophic’ Big Tech purge as legal battle with Amazon rages on


Dorsey rejected the notion that there was a concerted effort by Big Tech, arguing that it was “more likely,” that “companies came to their own conclusions or were emboldened by the actions of others.”

This concept was challenged last week when a number of foundational internet tool providers also decided not to host what they found dangerous. I do not believe this was coordinated. More likely: companies came to their own conclusions or were emboldened by the actions of others.

He said that he would like to see Twitter’s moderation policy be more decentralized, comparing the future model to that of bitcoin – “not controlled or influenced by any single individual entity.” Dorsey added that those who disagree with Twitter’s current policy are free to leave the platform.

If folks do not agree with our rules and enforcement, they can simply go to another internet service.