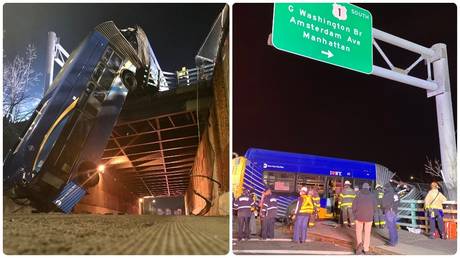 A tandem bus in New York was left hanging from the edge of an overpass in the Bronx. Images from the scene show the articulated vehicle split along the joint and balancing on its front end, which rammed into the roadway below.

The incident happened on Thursday night as the bus driver was trying to take a turn onto a ramp to the Washington Bridge, according to the New York Post tabloid. The height difference between the two levels is about 50 feet (15 meters).

FDNY units are on scene of a motor vehicle accident at University Ave and the Cross Bronx Expressway in the Bronx where a tandem bus has crashed through the barriers and is hanging off the overpass onto the roadway below. There are nine civilian injuries reported at this time. pic.twitter.com/00YQ897hhs

Emergency services reported that at least nine people were injured in the incident. Some media said the number could be higher.

The New York fire department (FDNY) secured the scene. “Currently we are making sure all the fuel and other hazardous materials within the vehicle is secured until the bus can be pulled onto the roadway,” FDNY Acting Battalion Chief Steven Moore said.

According to preliminary reports, the male bus driver lost control of the vehicle and veered off track, breaking through the overpass barrier.