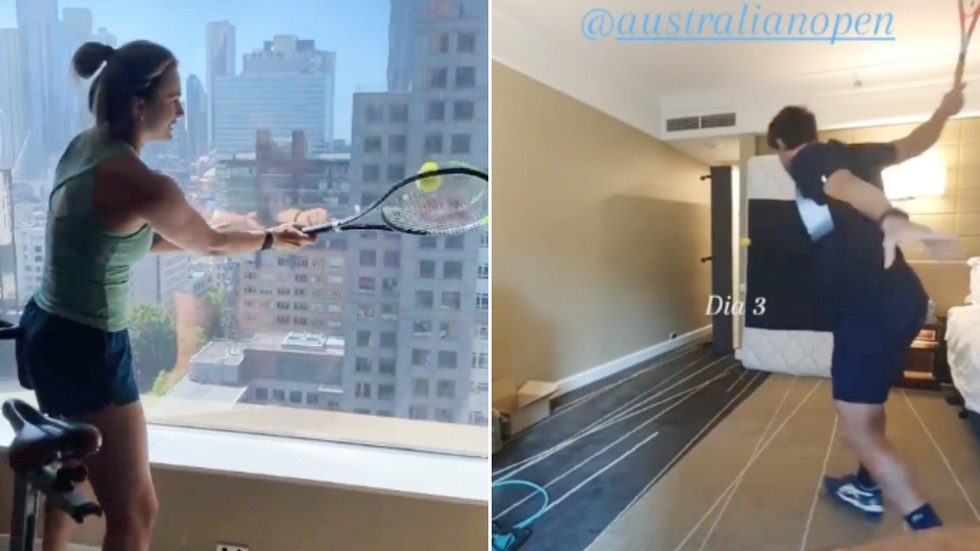 A host of tennis stars have been forced to improvise after being sent into quarantine ahead of the Australian Open as they have taken to social media to show off their unusual training activities while they await clearance.

A total of 72 players were caught up across inbound flights to Melbourne in recent days that reported positive Covid tests from passengers. It meant the players were forced into isolation as they were housed in individual hotel rooms and told they were not allowed out of their rooms to practice.

Aryna Sabalenka decided to create her very own “Quarantine Challenge” as she rebounded a tennis ball off her hotel room window, while Ons Jabeaur practiced slamming flying forehands into the pillows on her bed.

Pablo Cuevas, meanwhile, used his bed in a different way by standing the mattress up against the wall and using it to practice his backhand.

It wasn’t such a happy situation for Yulia Punitseva, however, who shared a video from her room as a mouse scurried across her floor.

Fans reacted to the quarantined players, with one criticizing tournament organizers for the restrictive measures imposed on the players ahead of such a huge tournament.

He posted, “In all honesty. I think the @AustralianOpen could have had a better system this year. I’m disappointed I have to watch players workout and even practice tennis in their rooms. How, how, how stupid. Maybe they should hold the matches in the rooms as well.”

Others were more supportive, with one fan tweeting, “I applaud you finding laughter in what is a very trying time for everyone due to COVID.”

Another suggested that the upcoming tournament could be the most wide-open ever, tweeting, “This is going to be a very unpredictable AusOpen!”

Also on rt.com
Australian Open thrown into crisis as 47 PLAYERS forced into Covid quarantine ahead of first Grand Slam of 2021