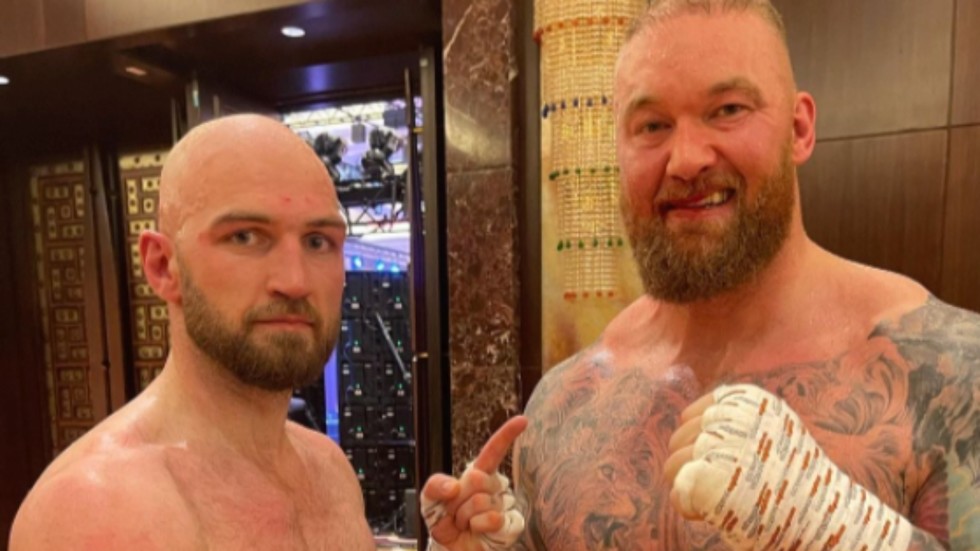 Hafthor Bjornsson tuned up for his eagerly-anticipated strongman superfight with Eddie Hall by taking a boxing match with pro fighter Steven Ward in Dubai, and came through the bout after earning a draw.

The Game of Thrones star and strongman icon outweighed his opponent by 140lbs (63kg), but the big Icelander conceded a wealth of experience to the Belfast-born fighter, who headed into the matchup with a 13-1 record.

However, the sheer size and power of Bjornsson wasn’t totally avoidable, even for the experienced pro, as he was briefly dropped by a right hand to the back of his shoulder.

But the Northern Irish pro was able to take the hulking strongman the distance with the pair both having their hands raised after the bout was declared a draw.

“What a night,” Ward said after the fight.

“The exhibition is over, and big Thor hits like a horse!

“But it was great. It was quite exciting. It was a great set-up, and it was class having a crowd finally back watching boxing.

Bjornsson was equally excited following the fight, saying, “What an experience this was!! Huge thanks to @steven_ward for doing this with me! What a champ! Great guy and an absolute warrior in the ring!”

Bjornsson will take on Hall in September, with the English strongman talking up his pre-fight preparations ahead of the bout.

“I’m training for this fight like I trained to be the strongest man in the world,” he said.

“No stone unturned and anyone in my way is getting milled down.

“With the experience (promoters) MTK Global brings to the table, this event will be even better than it was going to be.

“As for the fight itself, I have zero doubt in my mind that cry baby Thor is getting folded in half and sent packing back to Iceland.”