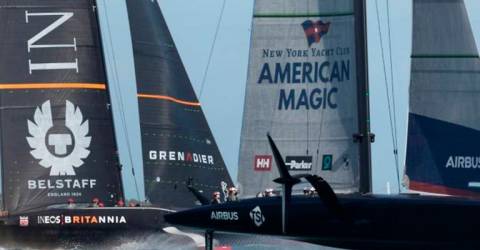 AUKLAND: INEOS Team UK cruised to an 18-second win over Luna Rossa in tough conditions on Sunday to make it four victories from four starts in the opening weekend of the Challenger Series, which decides who face Team New Zealand (TNZ) in the America’s Cup.

New York Yacht Club’s American Magic were denied their first points in the series when “Patriot” capsized in the second race after encountering a massive gust of wind while negotiating a sharp turn.

A dramatic shift in the wind had earlier forced organisers to stop the day’s opening race with Ben Ainslie’s INEOS Team UK aboard “Britannia” leading after four legs at Waitemata Harbour in Auckland, New Zealand.

The race was then restarted after the course was realigned.

In conditions vastly different from the light breeze teams experienced on Saturday, INEOS Team UK excelled to seal the win and put themselves in a commanding position.

American Magic were leading Luna Rossa when disaster struck as their vessel went airborne and hit the water before falling on its side, handing their Italian opponents their second victory of the series from four races.

All members of the American team were accounted for before efforts began to save the yacht with the two other teams in the series as well as TNZ chipping in.

“The team’s AC75 racing yacht ‘Patriot’ was damaged during the incident and began taking on water,” the American team said in a statement.

“Patriot has been stabilised and is in the process of being towed slowly back to shore. We’d like to again express our sincere thanks to our competitors… for immediately coming to our assistance.”

Ainslie said watching the yacht capsize during the manoeuvre was “horrific”.

“You don’t want to see that happen to anyone. I think everyone is OK which is the primary concern,” he said.

The winner of the series ending on Feb. 22 will take on holders TNZ in a series of head-to-head races from March 6 for the America’s Cup, known as the “Auld Mug”. – Reuters