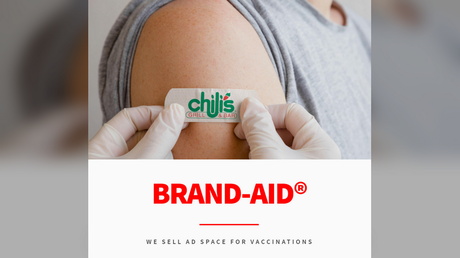 A website that claims to sell ad space for Covid-19 vaccinations has triggered both laughter and existential dread, with many expressing despair over the possibility that the absurd gimmick could actually be real.

The facetious marketing service appears to be the creation of Danielle Baskin, a designer, artist and self-described instigator of “internet pranks.”

“Rolling out the vaccine is expensive. That’s why some countries are opting into the BRAND-AID® program. Corporations subsidize government costs by paying for a tiny ad that goes on people’s arms after the injection, so their brand can reach audiences at vaccination sites,” Baskin tweeted from her personal account. The message included photoshopped images of band aids featuring logos of various corporate brands, including Chili’s restaurant chain, Comcast, and John Deere tractors.

Rolling out the vaccine is expensive. That’s why some countries are opting into the BRAND-AID® program. Corporations subsidize government costs by paying for a tiny ad that goes on people’s arms after the injection, so their brand can reach audiences at vaccination sites. 🩹👁️ pic.twitter.com/FLouzqIOXb

She later linked a website that invited companies to enroll in the Brand-aid “program,” explaining that there is a “minimum order of 30,000 bandages.” The website also discloses that images of the corporate-sponsored band-aids are for demonstration purposes only, and the featured brands are not actually participating in the comical marketing stunt.

The scheme caused many to mourn for civilization. Popular podcast host Bridget Phetasy observed that the corporate-sponsored shots seemed as if they were from an episode of ‘Black Mirror’, the British TV drama that explores the disturbing and darkly humorous ways in which technology has shaped modern life.

Another comment described the ‘service’ as the “one of the most American things I’ve ever seen.”

Others appeared to be deeply disturbed by the ad campaign.

i dunno. maybe life-saving healthcare *shouldn’t* be made into a marketing opportunity for unrelated companies??

This is possibly the worst thing I have ever seen in my life.

In a series of follow-up tweets, Baskin seemed to strongly suggest that ‘brand-aid’ was a prank.

“So many people will be Instagramming their bandaged arm right after they get the vaccine, so this is very valuable ad space. 1 vaccine = 1000s of potential impressions,” read one tweet, followed by: “Know someone on [the] fence about getting a vaccine? Tell them they have a chance to get 20% off at Bed Bath & Beyond and they might change their mind.”

She went on to insist that the ad service seemed “fun” and not “dystopian.”

She eventually dropped an even more blatant hint.

“The reason this might be satire isn’t because it seems like a disturbing idea. It’s because it would take an additional 3 months for brands to sign off on the project,” Baskin joked.

But many still admitted that they couldn’t tell if she was being serious or not, conceding that the crude gimmick was within the realm of possibility.

I dont know if this is real, but if it speeds up the rollout then why not

Baskin isn’t the first person to think up zany ways to create hype for Covid-19 vaccines. Last week, cannabis activists in Washington, DC announced they would offer a free bag of marijuana to those receiving the jab. The free giveaway is called Joints for Jabs, Forbes said in an apparently serious report, citing a press release.