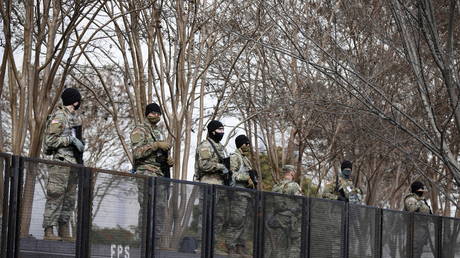 The acting head of the Pentagon has stressed that the thousands of National Guard troops stationed around the US capital do not pose an “insider threat,” rebuffing concerns of an internal plot to disrupt Joe Biden’s inauguration.

Acting Defense Secretary Christopher Miller said that while the military and FBI are pulling out all the stops for security ahead of Inauguration Day, including an intense vetting process for the 25,000 Guard troops to be deployed around Washington, DC, there is no indication of any plans for an inside job.

“While we have no intelligence indicating an insider threat, we are leaving no stone unturned in securing the capital. This type of vetting often takes place by law enforcement for significant security events.  However, in this case the scope of military participation is unique,” Miller said in a statement on Monday.

“As is normal for military support to large security events, the Department will vet National Guardsmen who are in Washington, DC. While we have no intelligence indicating an insider threat, we are leaving no stone unturned in securing the Capitol.” – A/SD Chris Miller

The secretary added that the Guard would provide “additional training” to troops taking part in the DC security detail, telling them to report to their superiors “if they see or hear something that is not appropriate” among fellow troops, and that the FBI is helping the Pentagon in the vetting process.

The statement comes amid ramped up security concerns around Washington, DC after a crowd of supporters of President Donald Trump stormed the US Capitol building on January 6, sending the facility into lockdown and resulting in five deaths amid the chaos.

Earlier on Monday, Democrat Congressman Steve Cohen (Tennessee) told CNN that up to “75 percent” of the troops stationed in the capital “might want to do something” during Biden’s inauguration on Wednesday, citing the fact that the president-elect earned a smaller proportion of military votes compared to Trump, and that most soldiers are “white” and “male.”


Though even CNN’s Jim Sciutto was incredulous to Cohen’s suggestion, observing that voting for Trump itself does not make one an “insider threat,” fears of an internal conspiracy extend to the military as well. On Sunday, Army Secretary Ryan McCarthy told the Associated Press that officials were conscious of a potential threat, and that commanders had been warned to be on the look-out for anything suspicious among their own ranks.

“We’re continually going through the process, and taking second, third looks at every one of the individuals assigned to this operation,” McCarthy said, though added that so far, there has not been any sign of a real threat.

With Biden’s swearing-in just days away, Washington, DC has massively ramped up its police and military presence in the wake of the Capitol riot, with the Secret Service dividing the city into “Red” and “Green” sections – reminiscent of Baghdad’s heavily fortified Green Zone, set up to repel suicide bombers outside the US Embassy after the American invasion in 2003. The security theater has prompted some, such as freshman Democratic Rep. Ritchie Torres (New York), to demand the 7-foot fences and razor wire become a permanent fixture of the nation’s capital, penning a bill to leave up the barriers for good.