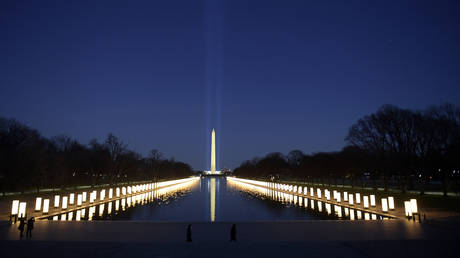 CNN’s politics editor and VP David Chalian was mocked without mercy after a gratuitously groveling display over Joe Biden, with his flowery metaphor about the president-elect “embracing America” compared to “North Korean TV.”

Chalian took the airwaves on Tuesday night with pre-Inauguration Day coverage, comparing Biden’s preparations to take office with four years of Donald Trump’s administration, calling the latter a “disgraced president” at the “lowest point in his presidency.”

“The contrast on display tonight was so stark. I mean, those lights that are just shooting out from the Lincoln Memorial along the reflecting pool, it’s like almost… extensions of Joe Biden’s arms embracing America,” Chalian, hardly able to contain his enthusiasm, said as images of the National Mall flashed on screen.

It was a moment where the new president sort of came to town and sort of convened the country in this moment of remembrance, outstretching his arms.

The segment was soon ridiculed as a cringeworthy exhibit of unmitigated bias, no less coming from CNN’s top political editor, which journalist Glenn Greenwald likened to news coverage one might find on “North Korean TV.”

“This sort of fawning State TV coverage of Biden-Harris has been going on for about a year now,” one commenter said, asking: “Why do people continue to tune in? How is CNN holding on to their viewership? One would think this would be extremely boring to watch for more than a few minutes.”

Others took their mockery in a wholly different direction, joking that some know all too well what it’s like to be “embraced” by the president-elect – with or without their consent.

“Didn’t Joe get in trouble for doing this sort of thing? Now he’s doing it to the whole nation without asking first,” another netizen quipped.

As critics predicted four years of “intolerable” coverage of Biden’s presidency, complete with swooning pundits, others recalled similar reactions to Biden’s ex-boss, President Barack Obama – many pointing to MSNBC’s Chris Matthews, who said in 2008 that Obama’s speeches send a “thrill running up my leg.”