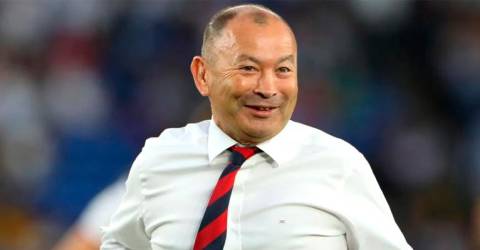 Officials, however, said following a further negative test, Jones will join up with his squad ahead of their Six Nations title defence a week on Thursday, a day after the players go into gamp at St George’s Park – the England football team’s training base.

“England coach Matt Proudfoot has tested positive for COVID-19 and is self-isolating. He is not displaying any symptoms,” an RFU statement said.

“Head coach Eddie Jones and (attack coach) Simon Amor have been identified as contacts and will also isolate for a 10-day period, in accordance with (UK) government guidelines.

An RFU spokeswoman said the rest of England’s staff would meet up as scheduled from Jan 25, with Jones able to join those sessions remotely.

England are due to name a Six Nations squad on Friday, with their title defence set to begin at home to Scotland on Feb 6.

Wednesday’s announcement came just a day after the RFU confirmed Jason Ryles, their newly appointed skills coach, would not be joining the side for the tournament.

Ryles and his family decided against relocating from Australia to London this month because of the British lockdown in response to the coronavirus, with new arrivals from Down Under also having to quarantine for 10 days.

Whether the Six Nations goes ahead as scheduled remains uncertain after French sports minister Roxana Maracineanu said last week she needed further “guarantees” from other governments to allow France to travel to Ireland and England.

Les Bleus are set to open the tournament at Italy on Feb 6 before heading to Dublin a week later and Twickenham on March 13 but French authorities are worried about a new variant of Covid-19 in Britain and Ireland.

Her comments came after this month’s final two rounds of pool matches in the European Champions and Challenge Cups were suspended because of French Covid-safety concerns.

The Top 14 and the Pro14 have moved domestic fixtures to fill the gaps over the next two weekends but the English Premiership decided to take a mid-season break. – AFP