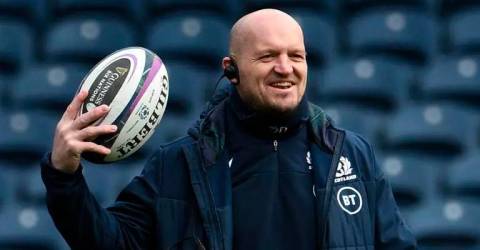 EDINBURGH: Gregor Townsend (pix) said such is the strength in depth in Scottish rugby he will be able to unleash new talent in the forthcoming Six Nations, after naming his tournament squad on Wednesday.

His side, who will be captained by fullback Stuart Hogg, face champions England first-up at Twickenham on February 6 bidding to regain the Calcutta Cup.

However, bolstered by an improved performance in last year’s Six Nations and backed up in the Autumn Nations Cup Townsend sounded upbeat.

“As coaches we have selected a group which we believe can build on the work our players put in throughout the recent Autumn Nations Cup campaign and kick on again in terms of performance levels,” he said.

“The depth we have across the squad enables us to bring in some new players who have excelled in recent weeks and others who we believe can perform at Test level.”

Townsend has selected just two scrum-halves in the experienced Ali Price and Harlequins Scott Steele, who has only one cap to his name.

At fly-half Townsend has opted for Finn Russell, who missed the Autumn Nations Cup due to injury.

Townsend said with coronavirus still very much present – it forced the Six Nations to be halted last year — and spectators unlikely to return it will be a very strange competition.

“Our tournament gets off to a fantastic start with a fixture we look forward to every year against England and the opportunity to win back the Calcutta Cup at Twickenham,” he said.

“We are very aware how different this year’s competition will be due to the Covid-19 pandemic, but it also provides a huge amount of positivity and enjoyment for millions of supporters.” – AFP