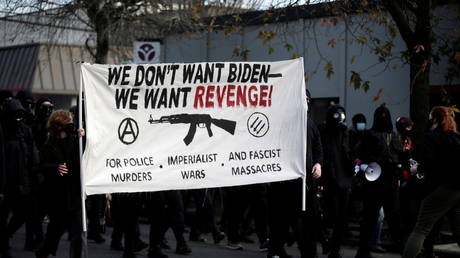 Left-wing rioters have gathered in Seattle and Portland to burn flags, break windows, and destroy property just hours after Democrat President Joe Biden was inaugurated. Their right-wing counterparts, however, were absent.

Groups of black-clad Antifa rioters took to the streets in Portland and Seattle, leaving a trail of destruction in their wake as they protested against the inauguration of President Joe Biden along with their usual targets, law enforcement and racism.


In Seattle, demonstrators set multiple American flags on fire as they blocked traffic and defaced property on Wednesday night.

Photos posted by the Seattle Police Department and others on the ground showed extensive graffiti and broken glass at several locations.

At least two of the rioters were arrested for property damage and assault.

The group targeted the Democratic Party of Oregon building for special destruction, breaking windows, spray painting graffiti (including “anarchy” symbols and a “F**k Biden”), and overturning dumpsters. Some held signs with slogans including “We are ungovernable,” “A new world from the ashes,” and “We don’t want Biden – we want revenge.”

Portland police told local media they arrested eight people on charges including rioting, reckless burning, possession of a destructive device, and criminal mischief. There were at least two other post-inauguration protests scheduled for Wednesday.