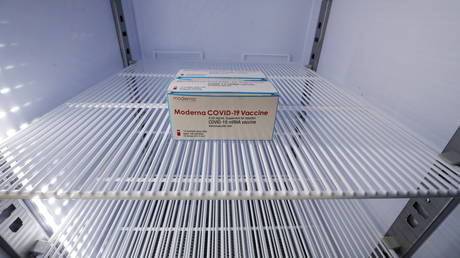 A Boston cleaner is reported to have accidentally ruined 1,900 doses of Moderna Covid-19 vaccine by unplugging a freezer. It’s the latest case highlighting how logistical problems can seriously undermine immunization efforts.

The incident happened at the VA Boston Pharmacy in the Jamaica Plain neighborhood of Boston. Staff discovered on Tuesday that a freezer storing the vaccine failed overnight, compromising it, a spokesman for the VA Boston Healthcare System said on Thursday.

“The plug was found loose after a contractor accidentally removed it while cleaning,” the statement said as cited by the Boston Globe, adding that an investigation was continuing into how the cleaner managed to get inside the secure room where the freezer was installed without tripping the alarm.

Also on rt.com
‘Great difficulties’: Pfizer vaccine delivery to Berlin CANCELLED for 1st week of January due to logistical problems


Covid-19 vaccines developed by Moderna and Pfizer/BioNTech, which were approved for emergency use in the US by the FDA last month, both use a novel technique for triggering an immune response. They contain messenger RNA, or mRNA, to trick a recipient’s cells into producing a particular virus protein, and teach the immune system to detect it and defeat the real coronavirus if it enters the body later.

The downside is that mRNA is extremely unstable, so both vaccines need to be kept at extremely low temperatures for long-term storage. A regular freezer can be used to keep the vaccines for a few weeks after delivery, but producers and doctors want to keep things safe and accept no leeway for cold chain incidents like the one in Boston.


Officials in Maine and Michigan this week announced that over 16,000 vaccine doses in total were spoiled due to improper temperature during transportation. Almost a thousand doses were wasted in Ohio due to unsuitable storage conditions at several facilities.

Blunders with supply, distribution, and storage are not the only problems the US has had with its Covid-19 vaccination effort. There are also issues with public mistrust. In Boston, less than half of the population is prepared to take the shot, according to focus groups and surveys conducted by the Boston Public Health Commission last month.

In Wisconsin, a self-described “conspiracy theorist” pharmacist destroyed over 500 doses of the vaccine last month due to the belief that it somehow alters people’s DNA.

Also on rt.com
Conspiracy theorist pharmacist who sabotaged Covid-19 vaccines claims they’re ‘not safe for people’ and could ‘change their DNA’