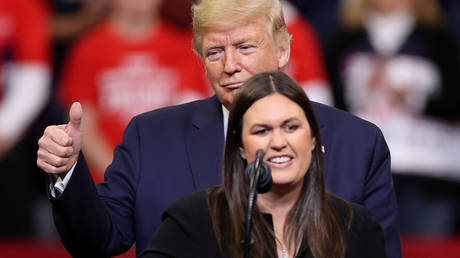 Former White House press secretary Sarah Huckabee Sanders announced Monday that she will run for governor of Arkansas in a widely-expected move.

The first former Donald Trump staffer to announce their own bid for office, Huckabee Sanders will run against Lt. Gov. Tim Griffin and Attorney General Leslie Rutledge in the Republican primary seeking the nomination for the November 2022 election.

In her campaign video, Huckabee Sanders, known for her pugnacious replies to reporters during her tenure as White House press secretary, said she would act as the last line of defense against the “radical left now in control of Washington.”

These remarks are sure to earn her favor with the loyal Trump voter base in Arkansas, given that the defeated former president won the state in the 2020 presidential election by almost 28 points.


The 38-year-old Sanders left the White House amicably in 2019 and was endorsed by Trump on the day she left office, back when he had a functioning Twitter account, when he wrote: “I hope she decides to run for Governor of Arkansas—she would be fantastic.”

Sanders’ father Mike Huckabee served as Arkansas governor from 1996 to 2007 and she herself served as a coordinator on her father’s 2002 reelection campaign, indicating election pedigree at least in the gubernatorial race.

The current governor, Republican Asa Hutchinson, is constitutionally banned from running for a third term.