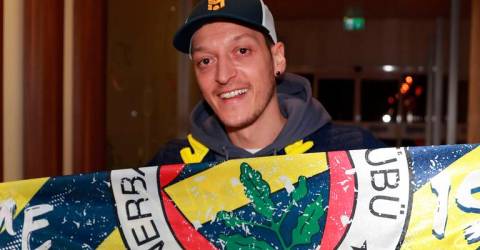 Fenerbahce declared their intention to sign Ozil last week after he fell out of favour at Arsenal and was not included in their Premier League or Europa League squads this season.

World Cup-winner Ozil, whose Arsenal contract was set to expire at the end of this campaign, was among the highest-paid players at the London club but had not featured since March.

Signed in 2013 for a then-club record fee of about £42 million from Real Madrid, Ozil played a crucial role under Arsene Wenger in ending Arsenal’s trophy drought, winning the FA Cup in his first season.

“Being with Arsenal for so long has meant I’ve experienced a big mix of ups and downs. Over 250 games, 44 goals and 71 assists later, it’s time that Arsenal and I finally part ways,” Ozil said in a statement on Twitter.

“Together, we ended the club’s nine-year trophy drought and brought long needed silverware back to the fans who deserved it.”

Ozil, 32, was marginalised under Wenger’s replacement Unai Emery and by Arteta, who said the player’s omission from the squad this season was for “football reasons”.

“The past few months haven’t been the easiest. Like every player, I want to play every minute of football for my team. In life, however, things do not always play out how we expect or want them to,” the midfielder added.

Technical director Edu thanked Ozil for his contributions to the club, which included three FA Cup triumphs, and for his professionalism in negotiating the transfer while manager Mikel Arteta said it was a “privilege” to play with and coach him.

“Mesut was at the heart of many great moments for this club over the years, including those three FA Cup final wins,” Arteta said. “These successes will always be part of our history. We thank Mesut and wish him all the best with Fenerbahce.” – Reuters