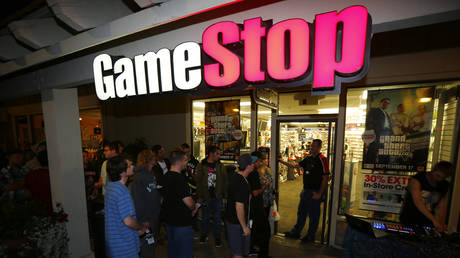 Despite no apparent future for brick-and-mortar retail, especially where easily downloadable video games are concerned, the moribund retailer is still soaring in value as diehard fans enacted revenge on a big short-seller.

The seemingly-doomed GameStop stock surged up to 145 percent on Monday, triggering no fewer than nine circuit-breakers to briefly halt trading as traders continued to buy in defiance of investing firm Citron Research deeming it a “failing mall-based retailer.” The stock’s holders, who’ve seen its market value more than triple since the beginning of the year, are apparently not done rubbing short-sellers’ faces in it.

Monday’s rally comes after a steep gain last week, when GameStop’s value climbed 83 percent in what Bloomberg reported to be the most volatile 10-day trading period on record for the stock. The unlikely holding even became the most actively-traded in the US at one point on Friday, with millions of shares being traded every few minutes.

Also on rt.com
The end of the ‘virgin wars’? Streamers & viewers weigh in after Twitch announces ‘SIMP’ BAN


The surprise boom from such a previously sleepy stock can be credited to the Reddit forum WallStreetBets, where day traders latched onto it after the arrival of pet supply e-tailer Chewy’s co-founder Ryan Cohen to its board signaled there was some life in the company yet. Nevertheless, some 139 percent of GameStop’s shares had been sold short – indicating most traders were still expecting a lucrative return on their doomsaying.

Citron founder Andrew Left, who gave his followers the advice to short GameStop on Tuesday, was finally forced to give up on his strategy on Friday, grumbling about the “angry mob who owns this stock” who had supposedly engaged in “repeated hacking and intimidation attempts” in response to his pronouncing a death sentence on their prize holding. In a since-deleted tweet, Left claimed GameStop fanatics had even made criminal threats against himself and his children that he planned to report to the Securities and Exchange Commission.

Apparently unaware of the level of devotion to be found among GameStop’s fans, Left’s premature epitaph for the game seller – and the calls for moderation of other financial professionals – have only convinced the WallStreetBets community to buy more of it. After Left deemed the chain “pretty much in terminal decline,” its value soared, backing the short-sellers who’d listened to him into a corner. The resulting “short squeeze” led panicked investors who’d shorted it to buy more to cover their shorts, leaving other short-sellers even more exposed.

Also on rt.com
I just beat Cyberpunk 2077. The most anticipated game of 2020 is a skin-deep, broken marvel


The vicious cycle has only continued as trading resumed this week, and the stock climbed as high as $159.18 at one point on Monday. The brief burst of glory for the struggling retailer’s stock value was even immortalized on online marketplace Etsy, where a user was selling a commemorative patch.

The Covid-19 pandemic has driven customers away from malls, already falling before the ever-growing retail juggernaut of Amazon, but Cohen arrived on the board with the promise to expand GameStop’s digital presence and pare back its brick-and-mortar footprint. He brought two former colleagues to the videogame chain’s board earlier this month, kicking off the start of the stock’s rise.