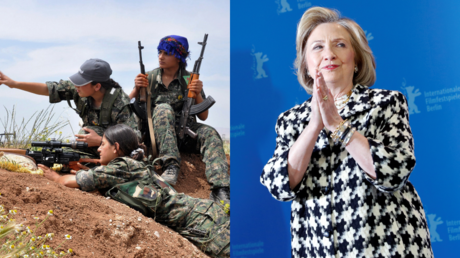 Hillary and Chelsea Clinton are producing a TV series based on the exploits of female Kurdish fighters in Syria. Expect a whitewashed tale of girlboss feminism, that just may be awful enough to finally unite the Kurds and Turks.

The Clintons, through their Hidden Light Productions company, have acquired the TV rights to author Gayle Tzemach Lemmon’s ‘The Daughters of Kobani: A Story of Rebellion, Courage, and Justice,’ Deadline revealed on Monday. The book tells the story of an all-female Kurdish militia group famed for fighting Islamic State (IS, formerly ISIS) in northern Syria – with American help.

“The Daughters of Kobani is an extraordinary account of brave, defiant women fighting for justice and equality,” said Hillary Clinton.

Also on rt.com
Crocodile tears? Hillary Clinton tweets that ‘sickening horror’ in Syria is ‘one man’s fault’ and gets reminded of her deeds


Clinton has a long and storied history with the women’s militia, the YPJ, an offshoot of the male-led YPG. The YPJ/YPG’s sister group, the PKK, has been waging a low-intensity conflict with Turkey for more than four decades, and in the 1990s was declared a terrorist group by the administration of Bill Clinton. The ideological leader of both groups, Abdullah Ocalan, was captured by Turkey with alleged help from the CIA in 1999.

As secretary of state, Hillary Clinton was an advocate for arming the YPG and YPJ during the Syrian Civil War. Airdrops of weapons began in 2015 and YPG/YPJ fighters counted on US air support to beat back IS from 2016 onwards, yet during this time the US was also allowing arms to fall into the hands of the same jihadist groups the women were fighting against. That the YPG currently guard oil fields in northern Syria, and have no intention of handing them back to Syrian President Bashar Assad, is surely a bonus for Clinton, who declared as far back as 2012 that “Assad must go!”

As such, commenters reckoned Clinton likely wasn’t the best teacher to learn about the Kurds from.

Is she going to include the parts about how her State Department armed and trained the jihadist groups that terrorize these women and their communities, or her husband’s support for Turkey’s atrocities against Kurds in the 1990s? https://t.co/bEqNVSDtnh

1. Destabilize other countries. 2. Become showrunner for new limited series based on their suffering. 3. Profit.

Nor is the source material entirely neutral either. Lemmon is a senior fellow at the Council on Foreign Relations, a neoconservative think tank. She opposed former president Donald Trump’s planned withdrawal from Afghanistan, vocally condemned his withdrawal from Syria, and condemned Russia’s involvement in the Syrian war – even though Moscow’s campaign has been widely credited with destroying much of IS’ territorial gains.

The Clintons have little experience in television, and Hidden Light Productions only has one other project in the works: a series adaptation of Hillary and Chelsea’s feminist children’s tale, ‘The Book of Gutsy Women’. Whatever the political slant of their latest project, commenters predicted a ham-fisted finished product.

Leaked script #Exclusive :The valiant YPG sniper has the unsuspecting ISIS combatant in her sights. Her finger tightens the trigger. She sees the glimmer of his beady little eyes“ #GirlBoss “ she mutters to herself underneath her breath.She pulls the trigger. https://t.co/rVJP4C13Cv

Imagine the amount of promising pitches from very talented people that were rejected because Hillary Clinton wanted to make a drama to satisfy her unhealthy obsessions towards the Middle East. https://t.co/WDuM7hCfaW