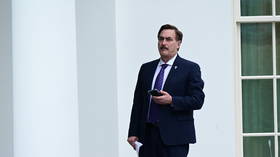 MyPillow CEO Mike Lindell has been kicked off Twitter for multiple violations of the platform’s civic integrity policy. The outspoken Trump supporter has been vocal about his belief that the 2020 election results were fraudulent.

Twitter confirmed on Monday night that Lindell had been permanently suspended for running afoul of rules barring users from “manipulating or interfering in elections or other civic processes.”

The founder of the Minnesota-based bedding manufacturer has faced blowback over his public statements following riots at the Capitol on January 6. Lindell claimed that the violence was sparked by far-left agitators and urged Donald Trump to continue to challenge the 2020 presidential results, and even reportedly advocated for martial law in order to keep President Joe Biden out of the White House.

Retailers such as Bed Bath & Beyond and Kohl’s have said that they will no longer stock MyPillow products, in an apparent protest against Lindell’s political activities. The businessman also faces potential litigation from Dominion Voting Systems for claiming that the company conspired to rig November’s presidential election.

A Twitter spokesperson said Lindell’s expulsion from the platform was the result of “repeated violations” of its civic integrity policy, but did not elaborate on which tweets prompted the ban. The policy states that punishments increase in severity depending on the number of violations a user commits.

Last week it was revealed that Lindell was considering running for governor of Minnesota. According to reports, Trump expressed support for the idea and promised to endorse his campaign.

The decision to pull the plug on Lindell’s account comes two weeks after Representative Marjorie Taylor Greene (R-Georgia) received a 12-hour ban after firing off a series of tweets questioning the integrity of the Georgia Senate elections.

In a statement released in response to her temporary ban, Greene claimed conservatives were being silenced and “cancelled” by corporations, adding that Americans “shouldn’t be scared into submission by Socialists who want to end their way of life.”

Twitter has banned over 70,000 accounts for spreading QAnon conspiracy theories and other misinformation following the unrest in the US capital in early January. Most notably, the company kicked then-president Trump off the site, claiming his messages could incite further violence. Trump has repeatedly urged his supporters to remain peaceful and has denied any responsibility for the January 6 riots, which have been linked to several deaths.

The sweeping measures being taken by Twitter and other Big Tech firms to regulate speech has sparked a heated debate about corporate power and censorship in the US. Senator Josh Hawley (R-Missouri), who has been labeled as a “traitor” and “insurrectionist” for challenging the presidential election results, penned an op-ed in the New York Post on Sunday in which he called on Americans to push back against corporations trying to “muzzle” the First Amendment.