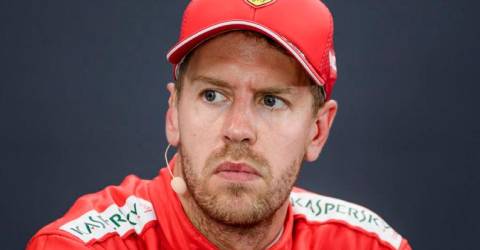 Aston Martin, who competed as Racing Point last year, are the latest re-birth of a Silverstone-based team whose lineage goes back to the one founded by Irish entrepreneur Jordan in 1991.

Vettel, world champion with Red Bull for four years in a row from 2010-13 and now 33, has joined from Ferrari as replacement for Mexican Sergio Perez alongside Canadian Lance Stroll – 22-year-old son of owner Lawrence.

Jordan told Reuters in a telephone interview that the signing of Vettel, despite two lacklustre years at Ferrari, could be game-changing.

“We’ve seen beyond any doubt that Lance is hugely quick, but there are other occasions where he’s not as quick,” said the 72-year-old, promoting his latest business venture in travel and event management app Guestia.

“I think it will up Lance’s game and the information and knowledge of a four times world champion will have a huge effect on the team.

“Jordan was floundering until we got Damon Hill and everybody knows he wasn’t the quickest of quick drivers. But what he had was a huge knowledge and ability of being able to win and he brought that from Williams.

“He kickstarted our winning ways. I do believe Vettel will bring that capacity.”

Hill, the 1996 world champion with Williams, joined Jordan in 1998 and secured their first Formula One win — a one-two with Ralf Schumacher in Belgium that year.

Perez – now at Red Bull with Max Verstappen – provided a first victory for the factory since the Jordan days in Bahrain last year but the former team owner said the new pairing would be very strong.

“I have to believe that Aston Martin will be there. Much more so than they ever were before,” he said.

“They should be able to earmark that third in the championship spot that they probably should have had this year… I do believe they will be justifiably in the top three.”

Jordan has known Stroll senior, a billionaire who made his money in fashion, since the 1990s and was full of admiration for what he had achieved.

“There’s nobody in Formula One in my opinion, now that (former commercial supremo) Bernie (Ecclestone) has gone, that has the ability, the brainpower and the financial charisma to be as successful as Lawrence Stroll,” he said.

“Whilst we’ve had huge differences of opinions, one thing that has never waned is my total belief in his man-made ability to be able to turn things around in his favour. He glitters with gold.”

Ever the entrepreneur, Jordan hopes Guestia – trialled by McLaren last year – will be a nice earner for him too once the world emerges from the COVID-19 pandemic and starts travelling again.

“This is the perfect opportunity to get in at the bottom,” he said.

The Formula One season starts in Bahrain on March 28. – Reuters