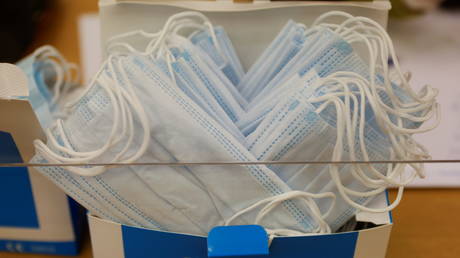 CNBC’s embrace of multiple masking to stop the spread of Covid-19 has reached Babylon Bee levels – literally – as the infamous satire outlet published a story on triple-masking on the same day that CNBC encouraged the behavior.

Capitalizing on audience confusion over whether masks are supposed to protect others or the wearer, CNBC’s Contessa Brewer explained (in an increasingly muffled voice as she demonstrated proper mask application on camera) on Monday that while the first mask protects others, the second one protects the wearer.

This is especially important as new and seemingly more contagious strains of Covid-19 spread among the population, US coronavirus czar Anthony Fauci claimed.

Here’s the full CNBC report from former Fox News host Shep Smith and former CBS/MSNBC/NBC correspondent and host Contessa Brewer about the greatness of not just double-masking, but triple-masking.h/t: @Justin_Hartpic.twitter.com/DgOhHuzUS5

For those who really want to be safe, however, wearing three masks is 90 percent effective, CNBC claimed in a graphic accompanying the segment, which cited a recent study that actually claimed a three-layer mask was hypothesized to be 90 percent effective.

For those unwilling to take the triple-mask challenge, Brewer held up a line of Chinese-manufactured masks similar to the N-95 variety that was so much in demand in the early months of the pandemic, explaining discomfort was proof the five-layer face covering was working.

Also on rt.com
One mask good, two masks better: Nearly a year into the pandemic, is advocating double masking really the way to reassure people?


“You really should see the mark on your face after you’re wearing it,” she gushed, to the dismay of social media users whose jobs require them to wear face-coverings all day. A secondary plague of “maskitis” and “maskne” from bacteria and mold growth inside face coverings causing breakouts and dry, flaky skin has turned the public health mandate into an aesthetic nightmare for some.

Many more users rolled their eyes, wondering whether people were being slowly trained to suffocate themselves using increasingly drastic Covid-19 orders.

Lets just suffocate our selves as much as possible ffs lol

Several took the suggestion to its (il)logical conclusion.

Double-masking is smart. But not as smart as triple-masking, which is itself not nearly as good as quadruple-masking. If you do less, you are no better than a murderer. https://t.co/cskPSPQJCt

“I’m going 50 masks, I’ll be protected from everything,” one user joked, while others pointed to a Babylon Bee article that came out the same day as CNBC’s report.

The title? ‘Triple Masker Looks Down on People Who Only Double Mask’.

Even those who supported mask-wearing in general raised an eyebrow about the multi-mask craze, questioning the science of piling on face coverings and wondering if someone was gaining financially from it.

How many of these folks invested in mask companies?If I had to spend 8 hours in a room of COVID-positive people not wearing masks, then I might wear 2-3 masks.

And a few argued that Fauci and the rest of the health establishment were trying to weasel out of subpar results from previous mask mandates.

They need to just make better masks if even they are acknowledging they are that ineffecient.

A Danish study published in November concluded mask-wearing makes little difference in virus transmission, while another published in The Lancet journal in January claimed that they do “help control” the spread, and scientists remain divided on the issue.