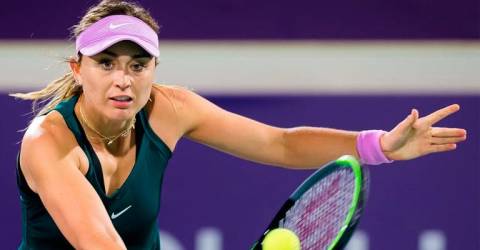 MELBOURNE: Spain’s Paula Badosa (pix) has not received training equipment to help her prepare for the Australian Open because of safety concerns but discussions are taking place on finding a way to get her some, health officials said on Tuesday.

Badosa was the first player to reveal she had tested positive for COVID-19 in quarantine in Melbourne ahead of the Grand Slam tennis tournament and was moved to a “health hotel” last Thursday to begin two more weeks of lockdown.

The 23-year-old on Monday described her extended period of quarantine as the “worst experience” of her career, adding that she was suffering from anxiety and claustrophobia.

The world number 67 complained that she had not received any training equipment and had been limited to doing sit-ups and using water bottles for weights in a windowless room she is sharing with her coach Javier Marti.

“Our priority is supporting the health and wellbeing of those in our care and reducing the risk of transmission to protect staff and community safety,” a COVID-19 Quarantine Victoria (CQV) spokesperson said.

“We are supporting the delivery of exercise equipment wherever possible and safe to do so from both a health and IPC (infection prevention and control) perspective.

“CQV is in ongoing discussions with Tennis Australia about suitable equipment that can be delivered to positive and symptomatic residents, given that the equipment can’t be reused and would need to be safely destroyed.”

The Grand Slam, which has been delayed by three weeks due to the disruption caused by the pandemic, will be played from Feb 8-21.

Badosa arrived in Melbourne after playing in Abu Dhabi earlier this month and was on her seventh day in quarantine when her test came back positive.

The Spanish player said if she was confirmed to have the more transmissible coronavirus variant first detected in the United Kingdom, she would not be let out until Feb. 5 when it would be “impossible” to get ready to play.

As many as 72 players have been confined to hotel rooms for two weeks after passengers on three charter flights taking them to Australia tested positive.

The organisers said they are in regular touch with Badosa but due to her positive test the restrictions were tighter on what was allowed in her hotel room than on the other players in hard lockdown.

“We have exercise equipment ready and waiting for her, and will continue to work with the health authorities on finding a solution for this to be delivered to her room,” a Tennis Australia spokeswoman told Reuters in a statement.

CQV said earlier there were no further positive tests among the 970-strong Australian Open contingent to report on Tuesday, leaving just the nine already confirmed cases.

Last week, Kazakhstan’s world No. 28 Yulia Putintseva complained she had been struggling to sleep in her hotel room due to rodents scurrying around. – Reuters