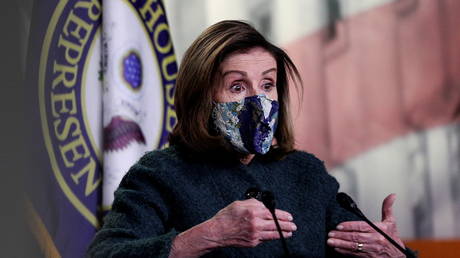 House Speaker Nancy Pelosi (D-California) has demanded additional security for lawmakers, citing threats from “within” the House, while the temporary fence around the Capitol is on the way to becoming permanent.

“We will probably need a supplemental [budget] for more security for members when the enemy is within the House of Representatives, a threat that members are concerned about in addition to what is happening outside,” Pelosi told reporters at the Capitol on Thursday.

Asked to specify her “enemy within” comment, Pelosi cited “members of Congress bringing guns on the floor.”

House speaker Nancy Pelosi criticized Republicans for their support of Marjorie Taylor Greene. On the security of members in Congress, she said ‘we will probably need a supplemental for more security for members when the enemy is within the House of Representatives’ pic.twitter.com/z1SFcTO78Y

Pelosi once again circled back to blaming former president Donald Trump for “inciting an insurrection” with the US Capitol riot on January 6 and for making House members fear their colleagues.

Also on rt.com
Stocks for me but not for thee: Redditors playing the stock market is problematic but, if a Democrat does it, no big deal


“It shouldn’t be that not only is the president of the United States inciting an insurrection but keeps fanning the flames, endangering the security of members of Congress to the point that they’re even concerned about members in the House of Representatives being a danger to them,” she said.

In a letter sent to House leadership this week, multiple lawmakers requested permission to hire their own private security, citing an uptick in threats against them, concerns Pelosi says she is addressing.

Democrats have indicated in the weeks following the Capitol riot that they fear members of the GOP. Rep. Alexandria Ocasio-Cortez (D-New York) claimed she was scared “white supremacist” members of the House would turn her over to the pro-Trump rioters when she was locked down with them after the Capitol was breached.

While she did not name specific members, the Democrat did accuse Senator Ted Cruz (R-Texas) of trying to “trying to get [her] killed.”

I am happy to work with Republicans on this issue where there’s common ground, but you almost had me murdered 3 weeks ago so you can sit this one out.Happy to work w/ almost any other GOP that aren’t trying to get me killed.In the meantime if you want to help, you can resign. https://t.co/4mVREbaqqm

Acting Capitol Police Chief Yogananda Pittman announced on Thursday that the fencing erected around the Capitol after the unrest will become permanent and back-up forces should be kept within close proximity at all times to prevent a future riot.

Some 5,000 National Guard troops – of the 25,000 initially deployed in Washington, DC to protect Joe Biden’s inauguration from threats that never materialized – are staying in the US capital indefinitely as well.

In her Thursday press conference, Pelosi also called out the Republican leadership and demanded they punish Rep. Marjorie Taylor Greene (R-Georgia) after a video surfaced of the Trump loyalist confronting Parkland shooting survivor and gun control advocate David Hogg, calling him a “coward.”

Greene has been accused of making numerous other troublesome statements in the past as well, with the media claiming she supports the “QAnon” conspiracy theory and even saying she supported the “execution” of top Democrat politicians on social media.

Also on rt.com
Armed 71-year-old man arrested with 20 rounds of ammo near US Capitol


Greene has responded to the controversy by saying numerous people have run her social media pages over the years.

Rep. Jimmy Gomez (D-California) has already promised a resolution to expel Taylor Greene from Congress, as numerous liberal activists have called for her to be removed from office.

While Pelosi’s rhetoric on Taylor Greene and “enemies” presumably within the GOP may seem extreme and be delivered with gusto, this is not the first time the House Speaker has used this sort of language in an attack on the opposing party.

In August, long before the US Capitol riot and Taylor Greene were making news, Pelosi called Republicans and then-president Trump “domestic enemies” and “enemies of the state” for daring to question the reliability of mass mail-in voting.

Also on rt.com
Pelosi calls Trump & Republicans ‘enemies of the state’ in diatribe about elections and postal service