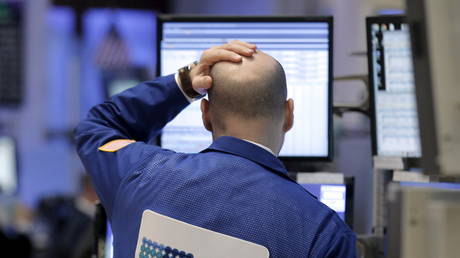 Trading app Robinhood has enraged its users and triggered accusations of “flagrant” manipulation after it banned the buying of GameStop, AMC, Blackberry and Nokia stock, the trading of which put the squeeze on Wall Street.


The app cited “market volatility” as the reason for the shutdown, which came after Wall Street insiders demanded something be done about the amateur traders’ “manipulation” of GameStop stock. Amid the frenzy and calls for regulation, the White House said it was monitoring the situation on Wednesday.

However, Robinhood was quickly accused of manipulation itself, which commentators argued went far beyond a group of small investors encouraging each other on Reddit to invest in GameStop.

“It’s hard to find market manipulation more flagrant than this,” journalist Glenn Greenwald tweeted. “But since it’s being done to protect the wealthiest and most powerful – Wall St oligarchs who own and control the establishment wings of both parties – it’s very hard to imagine the government treating it as such.”

It’s hard to find market manipulation more flagrant than this, but since it’s being done to protect the wealthiest and most powerful — Wall St oligarchs who own and control the establishment wings of both parties — it’s very hard to imagine the government treating it as such: https://t.co/VJnXpMAqkJ

Robinhood won’t allow purchases of $AMC, $BB, $GME – ONLY SALES. This is a brazen market manipulation to disadvantage small investors & help big hedge funds like Melvin who shorted these stocks.Will the SEC stop this? Or will the SEC back the hedgies?https://t.co/AOJ1SAeM8U

Use this form to file an SEC complaint about RobinHood’s conduct. You’ll notice if you click through to “market manipulation” it encompasses “Rigging quotes, prices, or trades to make it look like there is more or less demand for a security than is the case.” https://t.co/941yErQJuI

Robinhood, whose self-declared mission is to “democratize finance for all,” was accused of protecting the fat cats at the expense of “the little guy.”

“We’re gonna name our company Robin Hood after the guy who redistributed wealth to the regular person”*regular people use app for wealth distribution*Robin Hood: pic.twitter.com/OGbiEVKM3N

It sounds like trading apps like Robin Hood are blocking people from purchasing/trading AMC ($AMC) and GameStop ($GME) stocks.How is this legal? The little guy starts making some money, and Wall Street blocks them from participating? That’s the definition of corruption.

Remember when Robinhood was supposedly a “prosocial” good guy app allowing rank and file millennials to get into investing? Good times. pic.twitter.com/YkCigXkAeK

One of the firms that bailed out Melvin Capital, Citadel Securities, also facilitates trades made on Robinhood, working as a sort of middleman between the app and Wall Street’s exchanges. As such, commentators accused Robinhood of doing Citadel’s bidding in shutting down trade.

Just to be clear, Citadel, one of the largest clients of RobinHood, bailed out Melvin. Days later, RobinHood shut down purchases of $GME and other volatile names. Yes, the game is still rigged pic.twitter.com/5IC3pShFvJ

Amid the fiasco, users flooded Google’s app store with one-star reviews for Robinhood. After a brief dip in value following the ban, GameStop’s stock value recovered when trading opened on Thursday morning, surging to an all-time high of $469, before plunging below $290.