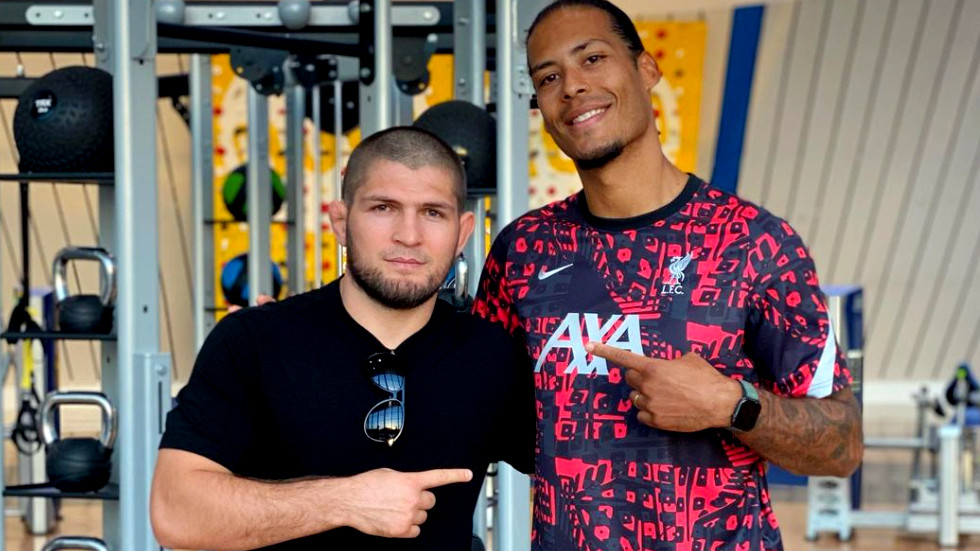 UFC champion Khabib Nurmagomedov has published a picture on Instagram of himself with totemic Netherlands defender Virgil van Dijk, telling the Liverpool talisman to be patient as he continues his rehab from a serious knee injury.

Van Dijk suffered a harrowing injury to his right ACL in October’s Merseyside derby with Everton when he was felled by a lunge from the Toffees’ England international goalkeeper Jordan Pickford.

The Premier League winner, who was predicted to be out of the game for anywhere between six and 12 months, faces an arduous return to full fitness but has received the backing of mixed martial arts royalty – and noted admirer of the beautiful game – Nurmagomedov.

The Russian hero has also spent his fair share of time on the treatment table. He suffered numerous injuries to his knee during 2014 and 2015 and was even forced out of a fight with Donald Cerrone on the same UFC 178 card that featured the original fight between Conor McGregor and Dustin Poirier, when a smiling Nurmagomedov happily posed for a photo backstage with McGregor on that very September night.

Now almost certainly permanently retired, Nurmagomedov passed words of encouragement to the injured Van Dijk when their paths crossed at the NAS Sports Complex in Dubai.

“It was nice to meet you,” Khabib wrote in a message accompanying the picture.

“I wish you get well and recovery soon/ I know what it is [to be injured] – be patient.”

VVD looking to sign Khabib as our new CB. No one getting past the GOAT! 🐐

While Nurmagomedov might be facing the end of his career in mixed martial arts, FC Kamaz, who play in the third tier of Russian football, have extended a contract offer to the global combat sports superstar.

“Welcome, Khabib,” they wrote online. “We offer you to make your football debut as part of our team.

“PFL is the football UFC… we play every match only to win [and are] an ambitious team with the task of entering the FNL.