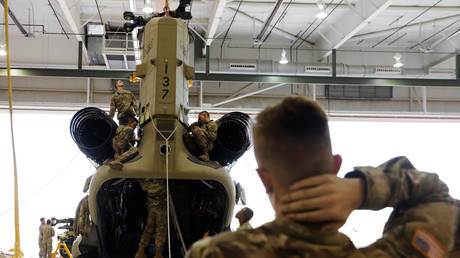 Eleven active duty US soldiers are in the hospital after consuming a liquid they believed to be alcohol, but which turned out to be antifreeze, leaving two troops “seriously ill” and requiring intensive care.

The soldiers imbibed the toxic chemical on Thursday while on a 10-day field exercise at Fort Bliss’s McGregor Range Complex in Texas, the Army said, adding that they drank the substance thinking it was an “alcoholic beverage.” They soon reported feeling sick and were taken to the hospital for treatment.

“All injured personnel remain at William Beaumont Army Medical Center. Two Soldiers remain seriously ill and are admitted to the Intensive Care Unit,” Fort Bliss spokesperson Lieutenant Colonel Allie Payne said in a statement on Friday, adding that the other nine are still “under observation and close lab monitoring.”


Payne noted that military regulations “prohibit the consumption of alcohol in a field training environment,” saying in a separate statement that the substance was “acquired outside of authorized food supply distribution channels.”

All 11 soldiers have shown “significant improvement” since Thursday, Colonel Shawna Scully, who heads up the medical center, told CBS. She said that while one soldier was intubated on Friday, he is now stable and all are doing “incredibly well.”

Ingesting ethylene glycol can lead to rapid damage to the kidneys and even organ failure if enough is consumed, Scully said. It is not clear how much of the chemical each soldier drank.

The exact circumstances of the incident are under investigation by local military officials as well as the Army’s Criminal Investigation Command, but Payne said there is no indication of a “threat to the greater Fort Bliss community.”