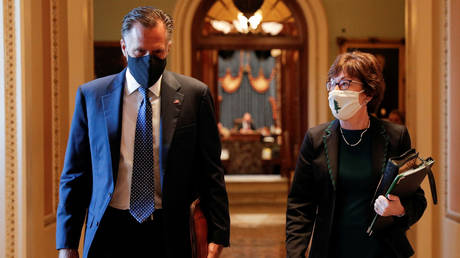 Republican senators, including Mitt Romney and Susan Collins, sent a letter to Joe Biden on Sunday, requesting a meeting to discuss Covid-19 economic relief – but the attempt at bipartisanship is being eviscerated on social media.

The Republicans’ specific plan will be unveiled on Monday, but they say it aligns with the president’s “stated priorities” and could win “bipartisan support.”

Biden’s Covid-19 relief package is worth $1.9 trillion, a cost some critics have argued is too high. The plan also includes $1,400 stimulus checks for individuals.

Specifics for the Republican plan were not given in the letter, but it does include funding for schools, small businesses, and vaccination distribution. One detail that may set it apart is cost. While they do not reveal the amount of their plan, the Republicans do bring up the fact that some funds from both of the previous stimulus bills remain unspent.

Sen. Bill Cassidy (R-Louisiana), who signed the letter, did give some insight into the proposal, saying on ‘Fox News Sunday’ that this GOP plan would cost less than half of Biden’s plan and offer $1,000 stimulus checks to households that meet certain income criteria.

“The proposal we have outlined is mindful of these past efforts,” the lawmakers write.

The senators are requesting a meeting with Biden to discuss the specifics of their plan and to “work in good faith” to fulfill the president’s repeated calls for “unity.”

Also on rt.com
‘Torturing the English language’: Biden accused of twisting the truth with promise his Covid-19 stimulus plan ‘finishes the job’


Brian Deese, director of the National Economic Council, has told CNN the White House has received the letter and will be reviewing it.

Romney and company’s letter has drawn much mockery on social media, among both liberals and conservatives.

“He doesn’t care,” tweeted writer Stephen L. Miller, referencing Biden, who has been dead set on his specific Covid plan getting passed.

“Imagine negotiating a contract with a family for a house worth $300K. They have four kids. While you’re sitting at the realtors the 5-year old slides her American Girl doll across the table and says ‘Here’s our offer….this will make everyone happy,’” Project Lincoln’s Fred Wellman added, calling the letter “trash” without knowing any specifics of the proposal he was slamming.

Imagine negotiating a contract with a family for a house worth $300K. They have four kids. While you’re sitting at the realtors the 5-year old slides her American Girl doll across the table and says “Here’s our offer….this will make everyone happy….”That’s this trash. https://t.co/oGY1z10zmt

Yeah, but none of that went to bailout Democrat cities and states, and very little went to payoff Biden donors. There has to be a new bill. https://t.co/t70n3jeqT6

Republicans sat on the sidelines and did nothing about Covid relief for seven months last year under Trump. Now they wait until the last day before the Democratic Congress moves legislation and they want to negotiate a new bipartisan bill.https://t.co/Bdu9giBt3A

With Democrats in control of Congress, it is likely Biden’s plan will be passed sometime in the coming days. He has claimed this bill “finishes the job” of getting a promised $2,000 stimulus to Americans.

While the bill offers a $1,400 stimulus, it would equate to $2,000 if one adds the previous stimulus checks distributed under Donald Trump for $600. This fuzzy math, along with Biden’s broken promise to have $2,000 checks sent out “immediately” once he took office, were blasted on Saturday after the president tweeted praise for his own bill.

$600 is simply not enough when you have to choose between paying your rent and putting food on the table. That’s why my American Rescue Plan finishes the job of getting $2,000 to folks who need it most.