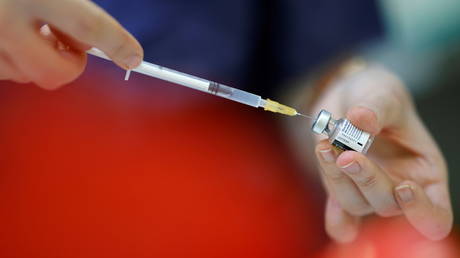 Representative Stephen F. Lynch of Massachusetts has tested positive for Covid-19, his office said. The lawmaker received his second shot of the Pfizer vaccine before Joe Biden’s inauguration.

Lynch “had received the second dose of the Pfizer vaccine and subsequently received a negative Covid-19 test prior to attending President Biden’s Inauguration,” on January 20, the statement added, without specifying the date. Lynch has not developed any symptoms and feels fine, but will remain in self-quarantine, voting in Congress by proxy.


The vaccine requires two shots administered several weeks apart, and some time afterwards, to fully kick in, and none of them claim to offer full protection, so it’s possible to be infected even after both doses. A false positive test is also possible.

Another Massachusetts representative, Lori Trahan, reported testing positive for Covid-19 on Friday. She said she was asymptomatic and self-isolating, and plans to cast her votes by proxy, too. Last week, during a visit to Washington, she tested negative, she said.

After repeatedly testing negative for COVID-19, I learned moments ago that I have tested positive for the virus. I am fortunate to be asymptomatic and have immediately begun to self-quarantine. Our team will continue working fully remote and remains a resource to #MA3 residents. pic.twitter.com/GyJGWrTKIV

Massachusetts currently has nine congressional districts, with all House seats held by Democrats. Lynch and Trahan represent the 8th and 3rd districts respectively.