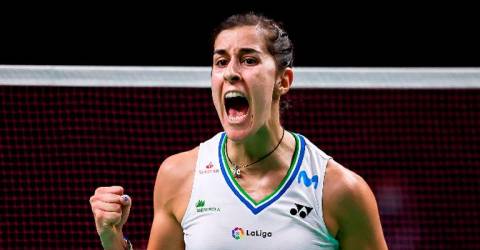 The delayed 2020 season finale, which began Wednesday, is the third tournament behind closed doors in three weeks in Bangkok, as badminton resumes after months of coronavirus cancellations.

The Spaniard – winner of back-to-back titles for the past fortnight – is gunning for a hattrick of victories in tomorrow’s finals.

Her opponent, 13th-ranked Pornpawee, has performed better than expected in the World Tour.

She beat her personal idol, Thai star Ratchanok Intanon, and top-ranked Tai Tzu-ying during the round-robin stage earlier this week.

But the 23-year-old was no match against the more experienced Marin, who praised Pornpawee’s play but admitted that three straight weeks of badminton was wearing on her.

“Three tournaments in a row is tough,” said the fifth-seeded player. “But I am looking forward to tomorrow… I’m really happy to play and give my best tomorrow and enjoy one more game.”

Marin will once again be facing off against top-ranked Tai Tzu-ying, who she had beaten two weeks in a row during the previous tournaments’ finals.

The Taiwanese player earlier in the day trounced South Korean teen prodigy An Se-young, who admitted to feeling lethargic during the 37-minute game.

As for Tai’s final meeting with Marin, she said she wanted to just “focus now and be patient” for Sunday’s finals.

Missing from the tournament are players from China and Japan – 2019’s World Tour Finals champs – because of coronavirus problems.

Despite the strict biosecurity arrangements in Bangkok, four people inside the tournament “bubble” have tested positive, including two players who were forced to withdraw. – AFP