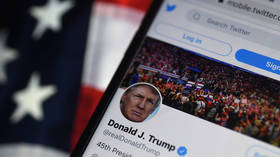 Project Veritas has posted leaked videos exposing internal talks at Facebook lamenting the company’s admittedly excessive power but at the same time seeking to use its influence to “work with” President Joe Biden’s administration.

“These were all important and positive steps,” Facebook CEO Mark Zuckerberg said of the executive orders on immigration, Covid-19 and other issues that Biden signed right after being inaugurated on January 20. “And I am looking forward to opportunities where Facebook is going to be able to work together with this new administration on some of their top priorities, starting with Covid response.”

Zuckerberg added that Biden was quickly taking action “on areas that we as a company really care quite deeply about and have for some time,” such as immigration, ending restrictions on travel from predominantly Muslim countries with inadequate security-screening capabilities, and advancing “racial justice and equity.”

The comments came from internal meetings at Facebook that Project Veritas, an undercover journalism outlet, obtained through an unidentified source. The Q&A meetings with Zuckerberg and other executives occurred in January – one on January 7, before Biden took office, and the other on January 21, just after he was installed as president – and Project Veritas founder James O’Keefe said his company’s Facebook “insider” remains on the job and aims to expose more secrets.

The discussions gave no appearance of political objectivity. For instance, Zuckerberg gushed over the election of the first female and non-white vice president and appeared to take some credit for making that happen, saying that “despite the challenges that we are facing as a country, we all have so much to be proud of.”

In contrast, Zuckerberg blasted former president Donald Trump for using his last days in office “to undermine the peaceful and lawful transition of power.” He argued that the protesters who participated in the US Capitol riot on January 6 somehow got preferential treatment from law enforcement. “It was troubling to see how people in this mob were treated compared to the stark contrast we saw during (Black Lives Matter and Antifa) protests.”

Ironically, even as Facebook works to help bring about its desired policies, executives admitted that the company has excessive power. Nick Clegg, Facebook’s head of global affairs, conceded that politicians from such countries as Germany and Mexico have expressed “disquiet” about the power of Big Tech to control public discussion. He said Facebook agrees with the argument that private companies should be making decisions in a way that is framed by democratically agreed rules and principles.

“At the moment, those democratically agreed rules don’t exist,” Clegg said, apparently overlooking such frameworks as the US Constitution.

Guy Rosen, vice president for integrity, said Facebook has a program to “freeze commenting” on threads when its systems detect “hate speech” or violence. New censorship tools are among advances that Facebook has made in the past three or four years in “the integrity space, our efforts to protect elections,” he said.

Facebook Vice president for civil rights Roy Austin suggested using Oculus virtual-reality technology “to help a white police officer understand what it feels like to be a young black man who’s stopped and searched and arrested by the police.” He added, “I want every major decision to run through a civil rights lens.”