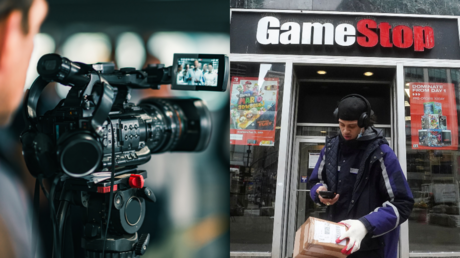 Although amateur traders are still locked into their multibillion dollar battle with Wall Street’s top hedge funds, MGM has acquired the film rights to a book on the timely tale.

$GME (GameStop) stock closed high on Friday, a day after data firm Ortex revealed that short sellers lost a whopping $70 billion on it and stocks like it in January. Within hours of the closing bell ringing in New York, MGM acquired the film rights to ‘The Antisocial Network’, an upcoming book on the story by bestselling author Ben Mezrich, Deadline reported on Sunday.

Mezrich confirmed the news later that night, tweeting a short and simple “YOLO.”

The book hasn’t yet found a publisher, and the story is very much still developing. However, the David versus Goliath tale has quickly become the year’s biggest news story.

The story began with GameStop, the brick-and-mortar video games retailer deep into what investing firm Citron Research called “terminal decline.” Betting on the company’s continued death spiral, some of Wall Street’s biggest hedge funds borrowed and sold tens of millions of $GME shares, waiting for the value to crash further so that they could buy back the shares at a lower price, return them to the lenders, and pocket the profit.

However, legions of amateur investors organized online and started buying up $GME, driving its profit up by more than 1,000 percent since December, and forcing the hedge funds to buy back their borrowed shares at a massively inflated price.

One hedge fund, Melvin Capital, was brought to its knees and needed a bailout from friendly firms to avoid bankruptcy, while Wall Street’s losses on $GME alone amounted to nearly $20 billion this year, according to data firm S3 Partners. As the amateurs repeated the same play with $AMC, $NOK, $BB (Amc Theaters, Nokia, Blackberry), and a handful of other declining companies with nostalgic appeal, they counted their profit and mocked the fat cats online with memes, insulting posts, and even sea shanties.


The financial establishment has so far reacted with rage. Billionaires have demanded that the government intervene against the amateur traders who beat them at their own game, trading app Robinhood briefly banned the purchase of $GME and similar shorted stocks, and the traders themselves have been banned from multiple social media platforms.

Still they held the line, and $GME opened on Monday at $314.

Whenever it hits screens, MGM’s story will likely be told from the small traders’ point of view, rather than Wall Street’s. Cameron and Tyler Winklevoss – famous for claiming that Facebook CEO Mark Zuckerberg stole their idea for the ubiquitous social network – have reportedly been signed on as executive producers, and the twins have been vocal advocates for the small traders since the GameStop saga began.