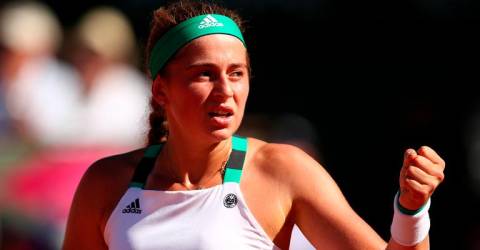 MELBOURNE: Former French Open champion Jelena Ostapenko (pix) fought back from a set down to reach the second round of the Gippsland Trophy as a raft of Australian Open warm-up tournaments got underway at Melbourne Park on Sunday.

The 23-year-old Latvian initially struggled with her serve and posted six double faults in the opening set of her first match since October against experienced Italian Sara Errani.

The 13th seed, who like her opponent has just completed two weeks of quarantine in Melbourne, found her rhythm in the second set and ran out a 4-6 6-3 6-1 winner after just under two hours on 1573 Arena.

Estonian Kaia Kanepi had an even bigger scare on Margaret Court Arena against Australian Astra Sharma, who was two points from victory in the second set before slumping to a 1-6 7-5 6-2 defeat.

Top seeds Simona Halep and Naomi Osaka were given byes and will join the fray in the second round.

Zheng Saisai, seeded 11th, was making her return to action after 11 months but was knocked out by Romanian Irina-Camelia Begu who came back from a set down to upset the Chinese 3-6 7-5 6-4.

Begu, who is 99 rungs below Zheng in the rankings, converted her third match point after a physical contest that lasted nearly three hours. – Reuters