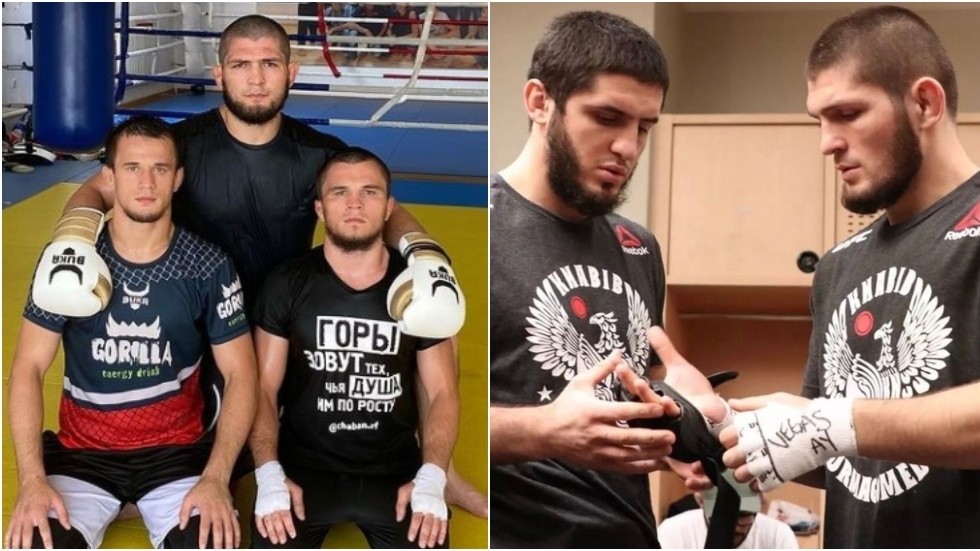 The curtain may have definitively been brought down on the career of UFC lightweight king Khabib Nurmagomedov, but that does not mean that the undefeated Russian’s time in MMA is over.

UFC  boss Dana White has appeared to admit defeat in his persistent efforts to lure Khabib back to the octagon for one final swansong, leaving fans mourning the loss of one of MMA’s biggest and brightest stars.

However, Khabib’s work is far from done as he aims to ensure that members of his family and inner circle follow the path of ‘The Eagle’ to the very top of their sport.

Khabib’s long-time coach Javier Mendez has already asserted that the Dagestani is a coach in the making, and that Khabib will look to take on the mantle once held by his late father and mentor Abdulmanap.

“He has learned so much from his father and from me. I watch him coaching and I see his father and me in him in his coaching style, so he already is a great coach – the world just doesn’t know it yet.”

‘Father’s Plan’ did not end with the untimely passing of Abdulmanap last year, but instead lives on through Khabib as he continues a legacy to bring through more talent from the Russian Caucasus.

While Khabib’s brotherhood often seems large in number, there are three men in particular who he could push to the very top of the pile.

With his cropped dark hair and beard, Umar Nurmagomedov bears a strong resemblance to his famous fighting cousin.

The 24-year-old bantamweight also shares an unbeaten record with his relative, in his case a 13-0 ledger which was recently added to with victory in his UFC debut against Sergey Morozov last month.

Khabib was in Umar’s corner that night, and was visibly emotional after his cousin secured a rear-naked choke victory over his dangerous Kazakh opponent.

Unlike Khabib, Umar catches the eye with his kickboxing but perhaps unsurprisingly given his Dagestani roots he also boasts a solid ground game, with six of his 13 wins coming by way of submission.

American Kickboxing Academy guru Mendez has tipped Umar for the very top in the space of the next few years.

“Umar’s awesome, I expect he’s going to be the world champion in five or six fights,” Mendez said in Abu Dhabi ahead of the budding bantamweight’s UFC bow.

“But he’s completely different from Khabib. In the way he fights, he’s more of a striker-type base guy. But he can do it all, he can do everything.”


Venturing into coaching mode, Khabib said after Umar’s victory on Fight Island last month: “He’ll grow with every single fight and I don’t want to rush. When you’re just 25 you’re definitely far from your full potential. When you are 28, 29, or 30, that’s the time we need to get him to reach his mental and physical peak…

“It’s good for him in terms of his emotional maturity. A very important experience to gain. Entering the octagon over and over again makes you a different animal, a different fighter… He won’t make the same mistake in his tenth fight. He’ll be a sniper, not a machine gunner.”

Umar has already petitioned Dana White for his next octagon appearance, and Khabib has said they are aiming for two more fights this year to set his cousin on course for what they hope will be a steady rise up the 135lbs rankings.

Another cousin and another Nurmagomedov with a thus-far unblemished professional record, lightweight Usman has been hailed by AKA boss Mendez as “the most gifted fighter I’ve trained in my entire life.”

“He can do it all. He needs seasoning, he needs experience and mental, but he is by far the most talented and gifted fighter I’ve ever had,” Mendez gushed to RT Sport.

After racking up most of his 11 victories in the Gorilla Fighting Championship ranks, the next stage on Usman’s journey will not be the bright lights of the UFC octagon, but rather the Bellator MMA cage.

That promotion has been deemed the best proving ground in the next stage of the 22-year-old’s career.

He steps into a 155lbs division typically stacked with explosive talent but will take with him a record which includes 10 finishes in his 11 fights.

After initially been tipped for his Bellator debut toward the end of last year, Usman now seems set to make his bow at Bellator 255 on February 26.

Should that materialize, the eyes of the MMA world will be watching as another of the Nurmagomedov clan continues their ascent.

At 29 years old, Makhachev is the eldest of the trio of contenders but Khabib will be equally desperate for his teammate to enjoy success.

Unlike Usman and Umar, Makhachev is not a Nurmagomedov family member but is a mainstay of Khabib’s inner circle and a longtime disciple of Abdulmanap.

Makhachev owns an 18-1 record, his sole defeat coming at the hands of Adriano Martins in his second UFC appearance back in 2015.

Since then the Dagestani lightweight has enjoyed six straight wins but has also endured no shortage of frustration.

Makhachev chalked up the last of those victories against Davi Ramos back in September of 2019, on the undercard of UFC 242 where Khabib defended his lightweight crown against Dustin Poirier.

What followed in 2020 was a year of cancellations for Makhachev, starting with the collapse of a fight with Alexander Hernandez in April due to the onset of the coronavirus pandemic.

Just as with Khabib’s ill-fated match-ups with Tony Ferguson, Makhachev then suffered a similar fate with attempts to get him in the octagon with former champion Rafael dos Anjos toward the end of last year.

After a positive Covid test for dos Anjos put paid to a planned meeting in October, a staph infection to Makhachev then forced the cancellation of the pair’s UFC Fight Night 182 headliner set for November 14.

The Dagestani finally appears set to return against American Drew Dober at UFC 259 in March. Dober will offer a stern reintroduction, having won six of his past seven fights and riding a hot streak of three knockout victories.

Also on rt.com
‘Injuries are a part of this game’: Khabib commiserates with Islam Makhachev as injury forces Russian out of maiden UFC main event


Khabib has long said that he sees Makhachev as the successor to his throne, with his father often saying that notorious Irishman Conor McGregor would have to go through Makhachev first if he ever wanted another crack at ‘The Eagle’.

Despite Khabib stepping out of the picture, the UFC lightweight rankings are no less explosive, with the likes of Poirier, Justin Gaethje, Charles Oliveira and now Michael Chandler all lurking at the top of the mountain.

Makhachev will have his work cut out if he wants to climb to the very top, but has previously said that having trained for so long with the best there is in the form of Khabib, he knows what it takes.

Succeed or fail, Khabib will be by his side for the journey – just as he will with Umar and Usman Nurmagomedov as they continue to forge their paths.