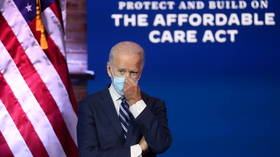 Joe Biden is expected to sign several decrees as part of an overhaul of the Trump administration’s hardline stance on immigration, according to multiple reports. The orders could lead to the naturalization of millions of migrants.

The US president will issue executive orders calling for a major review of asylum processing at the US-Mexico border, as well as protocols concerning naturalization and legal immigration, according to administration officials cited by the media.

One of the orders will create a task force that will work to reunite families who were separated by immigration authorities upon arrival in the United States. A Trump-era policy that allowed US border enforcement personnel to turn away thousands of asylum seekers will also be scrutinized.

In another decree, Biden will order an official review of what is fueling mass migration from Central and South America into the US, according to reports.

A third executive order on “immigrant integration and inclusion” aims to “streamline the naturalization process” and mandates the creation of a White House Task Force on New Americans. According to AFP, officials say that the order could eventually lead to the naturalization of some nine million immigrants deemed eligible for citizenship.

Immigration was a hot button issue in the 2020 presidential election, with Trump vowing to continue to tighten border control as part of his ‘America First’ policy. Although Trump’s immigration policies were widely criticized as inhumane by the media, some of his administration’s more controversial measures, such as separating families at the border and placing children in “cages,” actually began under the Obama administration, during which Biden served as vice president.