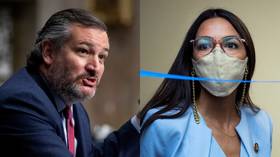 Representative Alexandria Ocasio-Cortez (D-New York) revealed she is a survivor of sexual assault while recounting last month’s Capitol riot. Many hailed her for the deeply personal story, while others questioned her motives.

During a livestream on Instagram on Monday night, the progressive lawmaker pushed back against Republican colleagues and critics who have demanded an apology after she accused Senator Ted Cruz (R-Texas) of putting her life in danger by allegedly helping to incite the unrest in the capital on January 6.

“The reason I’m getting emotional in this moment is because these folks who tell us to move on, that it’s not a big deal, that we should forget what’s happened, or even telling us to apologize. These are the same tactics of abusers. And I’m a survivor of sexual assault,” she said as she held back tears.

It was the first time that Ocasio-Cortez has publicly referred to being a victim of sexual assault, and she said during the livestream that she hadn’t told many people about it.

“When we go through trauma, trauma compounds on each other,” the 31-year-old congresswoman said.

Ocasio-Cortez described hiding in the bathroom of her congressional office during the violent demonstration, telling her livestream views that she thought that she was “going to die.”

Her anxiety increased when a man rushed into her office shouting, “Where is she? Where is she?” It turns out, however, that the individual was a Capitol Police officer. But Ocasio-Cortez claimed that he looked at her with “anger and hostility” and that she wasn’t sure whether the officer would “help us, or hurt us.”

Her emotional retelling of the pro-Donald Trump protest, which has been linked to several deaths, was met with an outpouring of support, with many hailing her “bravery” and “courage” for speaking out about her traumatic assault.

From one survivor of violence to another: thank you for your courage and unwillingness to let America look the other way, @AOC. This is a level of public vulnerability that none of us are owed. It is incredibly powerful… https://t.co/pMkIGv3xKD

Eli Valley, a popular progressive political cartoonist, anticipated that AOC would soon be smeared by people who think she is being “duplicitous” by comparing her sexual assault to “GOP-Nazi militias hunting.”

There were many who certainly took the view that Ocasio-Cortez was playing on people’s emotions to support her calls for “accountability” over the Capitol chaos.

Sara Gonzales, a host on conservative Blaze TV, described the congresswoman as a “disgustingly manipulative person, and a disgrace to this country,” adding that she holds this view as a fellow survivor of sexual assault.

Her critics weren’t limited to conservatives, however. Liberal journalist Michael Tracey said Ocasio-Cortez’s livestream was a “masterclass in emotional manipulation.”

He remained unapologetic after coming under fire from social media users for the comment, noting that “hysterical raging Twitter mobs are outlandishly wrong about 99% of the time.”

AOC’s reaction to the January 6 riot has come under fire from Republican lawmakers, following her insistence that Cruz and other GOP members almost had her “murdered” by allegedly lending support and credibility to protesters who challenged the legitimacy of the 2020 presidential elections. On Monday it was revealed that 13 GOP House members had signed a letter demanding an apology from Ocasio-Cortez for making the incendiary accusation.