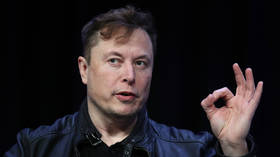 Elon Musk has announced that he is staying off Twitter for the time being, after a headline-grabbing week in which he made market-shaking comments about cryptocurrencies and the ongoing GameStop stock drama.

“Off Twitter for a while,” the world’s richest man tweeted, without elaborating on the reason for his social media sabbatical.

Although no stranger to the media limelight, Musk has had an unusually chaotic week, in which he voiced support for a Reddit insurgency against a hedge fund’s attempt to short-sell GameStop stock, posted messages that (briefly) sent ‘meme’ cryptocurrency Dogecoin into outer space, and predicted that bitcoin would soon be embraced by the financial sector.

In a widely discussed talk that he gave on the invitation-only social media app Clubhouse on Sunday night, Musk conceded that he had to be “careful” about what he says, because his remarks can “affect the market.”

For example, Musk’s recent tweets about Dogecoin have been credited at least in part to the digital currency’s massive, but apparently temporary, surge in value.

The Musk bump has also worked on more established coins. After adding ‘#bitcoin’ to his Twitter bio, the cryptocurrency’s value skyrocketed by nearly 20 percent.

Crypto enthusiasts mourned Musk’s announced hiatus from Twitter, with many of them asking the Tesla founder to throw his support behind other digital currencies.

Others posted memes that celebrated Musk’s unique ability to cause havoc in the markets with a single tweet.

Many observers predicted that Musk would be unable to resist sharing his thoughts with the world and would soon be back.

Although it’s unclear why he signed off or for how long he’ll be absent, dozens of comments expressed gratitude for Musk’s indirect participation in the Reddit GameStop saga.

“Thank you for everything Elon,”tweeted @WSBChairman, who became a de facto spokesman for the r/WallStreetBets Redditors who pumped up GameStop’s stock, crippling a hedge fund’s bet against the video game retailer and prompting NASDAQ to temporarily shut down trading.