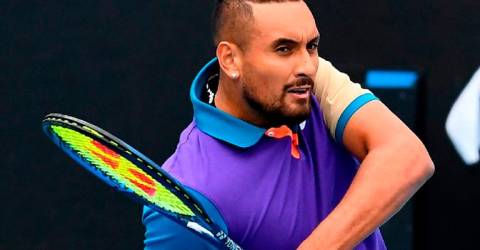 MELBOURNE: Nick Kyrgios (pix) shook off some rust to come from behind and beat France’s Alexandre Muller 3-6 6-4 7-6(4) at the ATP Murray River Open on Tuesday as the Australian made his return to the court for the first time in nearly a year.

The ATP 250 event is a warm-up tournament for players who have travelled to Melbourne for the Australian Open which begins on Monday.

Kyrgios last played in February last year in Acapulco before the COVID-19 pandemic shut down the tour and the 25-year-old did not travel overseas for the US Open or the rescheduled French Open.

“I was excited just to get back out here. Any opponent for me today was going to be tricky,” Kyrgios, who played despite struggling with a knee injury, said.

“I just wanted to find my feet, see how I was going to feel out here, and again, somehow pulled it out of the hat. It seems to be the story of my career, I’m just happy to get through.”

Kyrgios next plays compatriot Harry Bourchier in the second round.