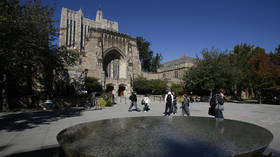 The US Department of Justice has dropped a lawsuit against Yale University for allegedly discriminating against Asian and white applicants, signaling the Biden administration’s intent to protect affirmative action programs.

The DOJ submitted a two-sentence filing in US District Court in Connecticut on Wednesday, notifying the judge in the case of its “voluntary dismissal of this action.” Federal court rules allowed the government to drop the case summarily because Yale hadn’t yet formally responded or sought dismissal of the lawsuit since it was filed in October, the DOJ said.

Former president Donald Trump’s administration had invested two years of investigative work, concluding that Yale had rejected “scores of Asian-American and white applicants each year based on their race, whom it otherwise would admit,” in favor of black students. Black applicants had four to 10 times the likelihood of being admitted to Yale as white or Asian students with the same academic credentials, the DOJ alleged.

The DOJ demanded in August that Yale stop using such criteria as skin color and national origin as factors in student admissions. After the Ivy League school refused, calling the allegations meritless, federal prosecutors followed through on their threat to sue in October. The case was seen possibly rising to the US Supreme Court, where it could have become a precedent, striking down affirmative action as unconstitutional.

Clarke has spoken out in favor of race-based discrimination against Asian students at least as recently as last year. She’s also been known to advocate even more controversial ideas. While she was president of the Black Students Association at Harvard University in 1994, Clarke opined in a letter to the student newspaper that “melanin endows blacks with greater mental, physical and spiritual abilities.” She apparently didn’t attempt to reconcile that view with the argument that black students should be shown favoritism in admissions.

The Trump-era DOJ also had been investigating admissions practices at Harvard. Just as Ivy League schools worked to drive down Jewish student populations in the 1920s, they have been accused of trying to limit Asian admissions in the past generation.

Even with such a disadvantage, Asian students make up about 23 percent of the student body at Harvard, but data released by the university in connection with a lawsuit showed that they would account for 43 percent if only academic qualifications were considered.

That lawsuit was filed by an advocacy group for fair admissions. A federal appeals court in Boston ruled last November that Harvard didn’t intentionally discriminate against Asian applicants.