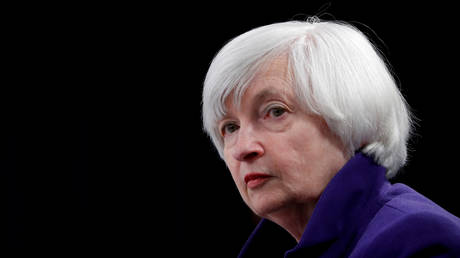 Yellen will convene the sit-down sometime this week, where she’ll meet with officials from the Securities and Exchange Commission (SEC), the Federal Reserve and its New York branch, as well as the Commodity Futures Trading Commission, the Wall Street Journal reported on Tuesday, citing Treasury spokeswoman Alexandra LaManna.

“Secretary Yellen believes the integrity of markets is important and has asked for a discussion of recent volatility in financial markets and whether recent activities are consistent with investor protection and fair and efficient markets,” LaManna told the Journal.


The meeting is expected to happen as early as Thursday.

The Treasury secretary reportedly felt the need to obtain permission from ethics lawyers before calling the meeting, according to Reuters, as she previously received a whopping $810,000 in speaking fees from one of the Wall Street hedge funds on the receiving end of the GameStop short squeeze, Citadel LLC. Those payments were just a fraction of the $7.2 million Yellen raked in from a who’s-who of corporations, banks and investment firms since 2019, among them Goldman Sachs, Google, Citi, and Credit Suisse.

The GameStop debacle kicked off quietly over 2020, but exploded into the headlines last week as a horde of online investors – many hailing from Reddit’s WallStreetBets forum – drove several companies’ stock prices through the roof. The amateur traders noticed major hedge funds were heavily short selling certain shares, effectively betting on those firms to fail, launching a frenzied buying campaign that imposed billions in losses on the funds, chief among them Citadel and Melvin Capital.


GameStop’s share price – as well as those of other shorted companies that were inflated during the buying spree, such as Nokia, BlackBerry and AMC – has since collapsed, tumbling 60 percent on Tuesday alone, though similar grassroots efforts have already begun to take hold in the metals markets.

White House press secretary Jen Psaki hinted that US regulators could soon address the volatility issues, telling reporters on Monday the SEC is “reviewing and monitoring the situation,” and that the GameStop mania had raised an “important set of policy issues.” She declined to say what actions might be taken, however.

The SEC itself also suggested last Friday that it would look closely at the actions of some brokerage firms, such as trading platform Robinhood, which restricted purchases of the inflated stocks, likely helping to quell the price surge and reign in the crippling losses inflicted on Wall Street.