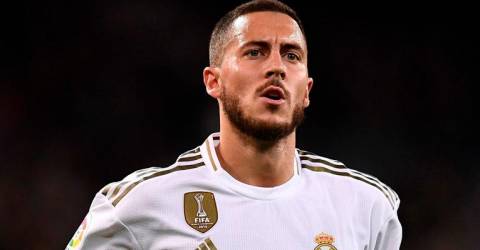 MADRID: Real Madrid forward Eden Hazard (pix) has suffered yet another injury in a torrid campaign blighted by fitness issues and is set to be out for up to six weeks with a thigh problem.

Real said in a statement on Wednesday that Hazard had injured a muscle in his left thigh following the day’s training session, which Spanish media said he was unable to complete.

The Belgian had missed the previous day’s session with muscle fatigue.

Real did not state for how long Hazard, 30, would be out although Spanish newspaper Marca indicated he would be sidelined for between four and six weeks.

He is ruled out of Saturday’s La Liga trip to Huesca and Tuesday’s home game with Getafe while he is almost certain to miss the Champions League last-16 first leg game at Atalanta on Feb 24 and their trip to league leaders Atletico Madrid on March 7.

Hazard, who joined Real from Chelsea for a club record €100 million in 2019, had his first season disrupted by two major ankle injuries and has had three separate spells on the sidelines this campaign.

He missed six weeks at the start of the season with an ankle injury and then was forced to miss two weeks in November after testing positive for COVID-19.

His return from the virus barely lasted 10 days due to a hamstring injury which prevented him from waiting six weeks for his next Real start, away to Osasuna on Jan 9.

He showed signs of his ability with a goal and impressive individual performance in a 4-1 win at Alaves on Jan 23 but hopes of a full return to form have been dealt a fresh blow with this latest muscle injury.

Hazard has made only six La Liga starts this season and has only completed 90 minutes in one league match in his short and troubled Real career.

Also on Wednesday, Real captain Sergio Ramos returned to full training for the first time on Wednesday after over two weeks out with a knee injury. – Reuters