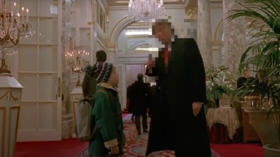 Former President Donald Trump apparently doesn’t have plans for a post-politics career in Hollywood, as he resigned from the Screen Actors Guild after the union threatened to expel him for “inciting” the January 6 US Capitol riot.

In a letter obtained by Fox News that Trump sent on Thursday to union chief Gabrielle Carteris, the ex-president said, “I write to you today regarding the so-called disciplinary committee hearing aimed at revoking my membership. Who cares!”

Also on rt.com
‘F**k every single Trump voter’: Biden may be in, but Hollywood’s & media’s crusade to destroy conservatives is just beginning


In typical Trump fashion, he went on to claim a more impressive resume than that of Carteris: “While I’m not familiar with your work, I’m very proud of my work on movies such as ‘Home Alone 2,’ ‘Zoolander’ and ‘Wall Street: Money Never Sleeps’; and television shows including ‘Fresh Prince of Bel-Air,’ ‘Saturday Night Live,’ and of course, one of the most successful shows in television history, ‘The Apprentice’ – to name just a few.”

He later added, “I no longer wish to be associated with your union.”

Former President Trump has resigned from the Screen Actors Guild after they ordered a disciplinary hearing into his membership following US Capitol attack. (h/t @kristincbrown)In his resignation letter, he said of the hearing: “Who cares!”SAG-AFTRA’s response: “Thank you.” pic.twitter.com/zVnvlJrQW7

Carteris rose to fame as a regular character on the ‘Beverly Hills 90210’ television series and has 68 acting credits.

The latest Trump feud stems from a January 19 ruling by the union’s national board finding probable cause that he violated the guild’s constitution by “inciting” the Capitol attack and sustaining a “misinformation” campaign that discredited journalists. The board ordered a disciplinary committee hearing to determine whether Trump is guilty and, if so, consider penalties ranging from a reprimand to a fine to expulsion.

“Donald Trump attacked the values this union holds most sacred – democracy, truth, respect for our fellow Americans of all races and faiths, and the sanctity of the free press,” Carteris said in announcing the decision. “There’s a straight line from his wanton disregard for the truth to the attacks on journalists perpetrated by his followers.”

The guild issued a two-word statement in response to Trump’s resignation: “Thank you.”

Some of the journalists whom Trump has criticized are Screen Actors Guild members. Executive director David White said the union must protect its members and come against Trump’s effort to undermine freedom of the press.

But Trump accused the union of attacking him to get media attention and distract from its own failures. “Your organization has done little for its members and nothing for me, besides collecting dues and promoting dangerous, un-American policies and ideas – as evident by your massive unemployment rates and lawsuits from celebrated actors,” he said.

Many observers were surprised to learn Trump was a member of the Screen Actors Guild in the first place, particularly in light of Hollywood’s hatred of him. Former President Ronald Reagan, who was a five-term president of SAG and had an extensive acting career, resigned from the union in 1960. That was years before he ran successfully for California’s governorship.

Today I learned former President Trump was a member of the Screen Actors Guild Thank you for this tidbit, @kristincbrown

Trump, who faces a Senate impeachment trial starting next week, had been a member of the guild since 1989. ‘Home Alone 2’ star Macaulay Culkin and other actors have called for Trump’s short appearance in the 1992 movie to be digitally removed. The cameo was negotiated as part of the agreement for the movie production to use New York’s iconic Plaza hotel, which Trump owned at the time.

Also on rt.com
Actress Kristy Swanson scourged for asking to be removed from John Hughes’ movies if Trump is edited out of ‘Home Alone 2’